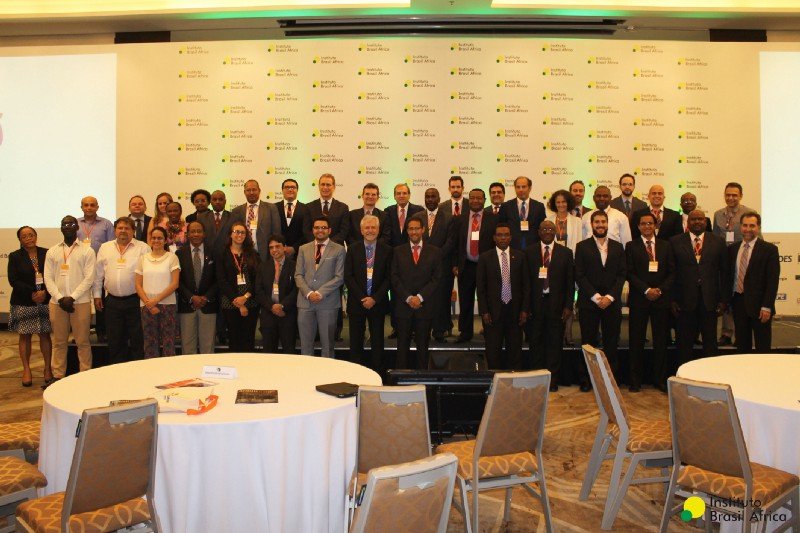 There are over 600 million people who live in Africa who do not have access to electric power. Although, it is one of the riches continents in energy sources, in fact, only 7% of the potential is being used there. As the electric energy infrastructure is directly related to development and this subject is considered as strategic for any government. Thus, for the purpose of sharing experiences, representatives from Brazil and 30 African countries met for two days at the 3rd Brazilian — African Forum that took place from November 19th — 20nd 2015 in Cabo de Santo Agostinho, in the Recife Metropolitan Region, Pernambuco.

The new president of the African Development Bank, Akinwumi Adesina, has defined his ambition to fight against and do away with the deficit of power supply in Africa by 2025. That in practice, means connecting 190 million houses and practically doubling the energy capacity of the network. The target is to achieve 100% universal access in urban areas by 2030. This data was presented on the forum panel by João Duarte Sarmento Cunha, the Chief of Climatic Changes during the event in Brazil.

Various initiatives for achieving that target were presented during the forum, some of them are already being carried out on the African continent. Credit lines, incubator companies, and spaces for partnerships are among the proposals. Standard Bank is the largest bank in Africa and it is present in 20 countries on the continent, and there were thirty projects focused on renewable energy sources by October 2015.

“The majority of the projects need 15-year financing and it is necessary to find a balance”, reveals Rentia Van Tonder, directress of energy and infrastructure at the bank and one of the lecturers of the Forum. “The largest energy source is from coal. Due to this, it is necessary to find alternative energy sources and appropriate surroundings for this investment”, she says. David Wangombe, dean of the Strathmore University Management and Commercial department, emphasized that among “the main challenges are the desertification and degradation of the soil and strong enough for seeking sustainability, besides the necessity for substantial strengthening of energy and increasing access to benefit rural communities”.

Another initiative came from Equatorial Guinea wagering on a company incubator for fomenting new investments in the energy supply sector, especially in the petroleum segment. “With support from companies and new startups, as well as the funding that nowadays is attractive, GEPetrol encourages national petroleum companies and also promote strategies for supporting, developing, and leading companies”, wagers Antonio Oburu Ondo, CEO of GEPetrol, the national petroleum company in Equatorial Guinea.

“Africa and Brazil have similar ecological environments. It is necessary to produce our own technology, instead of importing from other countries. Due to colonialism, the country knows how to make things, but it does not know how to create. Brazil has the know-how for producing airplanes, trains, and, for this reason, we want it to be our partner”, reveals Ekwow Spio-Garbrah, the Commerce and Industry ministry of Ghana, we already have the expertiseto generate energy from ocean waves, but we want to go beyond that. “Correct policies will bring about demographic growth, in which case, there is a need for correct actions to provide increasing energy. It is also necessary to define regulations so that the production of energy complies with its purpose”, he adds.

The ministry of Water, Irrigation, and Electricity of Ethiopia, Motuma Mekasa, points out the challenge to meet energy needs in his country. “The economy of Ethiopia is growing and there is an enormous potential for hydroelectric power supply. Due to varied biomasses that can harness wind, geothermal, and solar power, and also maximize the utilization of hydroelectric power, as less than 10% of it is harnessed”, he confirms. “Ethiopia has a 25-year plan. Various sources of energy are planned, ranging from hydroelectric to other alternative power sources, especially, wind power”. 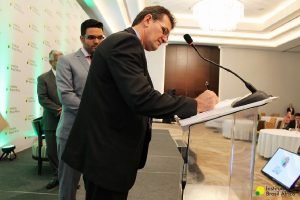 The Brazilian reality
One of the highlights of the event was the debate on Brazilian experiences to inspire African entrepreneurs and government administrators. One of them is the “Lights for Learning” project, sponsored by the Organization of Ibero-American States For Education, Science, and Culture (OEI), partnering with the Endesa Foundation. It began in 2012 and it is an initiative that intends to change the reality of 56 thousand rural schools that are not supplied with electric energy in 14 Ibero-American countries by installing photovoltaic panels. “We consider this project as a model technique of cooperation and contribution. It has already been created, including, a system for online monitoring for following up the project. The community participates and young people are trained for this initiative”, explains Adriana Weska, directress of the OEI office in Brazil.

The regulations of the sector and the organization of the production and energy distribution were also emphasized at the event and made African administrators pay attention. According to the Planning and Development secretary of the Brazilian Ministry of Mines and Energy, Altino Ventura Filho, the policies and guidelines of this sector prioritize energy safety, reasonable consumption costs, availability of the service to the population, respect for contracts, long-term research studies, diversification of the electricity matrix (especially the part focused on renewable energy sources), national integration of the energy sector and respect for the environment. “The Brazilian market is controlled though auctions, based on the demand for energy”, he reminds us.

“There has been significant progress achieved in the area of cooperation and actuation in the energetic area”, Solange David points out, vice-president of the Brazilian Electric Energy Commerce and Chamber council and invited to speak about the structure and mechanisms of incentives in the Brazilian energy market. “We have made progress in contracts in new energy auctions and also in planning for 2045, so that the system is able to expand to all the states in the Country”.

Even with diverse successful models, Brazil also faces its challenges regarding energy self-sufficiency, such as, the production of energy during dry seasons. “In order to overcome low water levels in reservoirs, Brazil has used power generated from thermoelectric generators. The behavior of wind power is seasonal and there is a great variation”, reminds Fernando José Carvalho, assistant director of planning and scheduling for ONS — National Electric System Operator. The body was created for coordinating the operations of the facilities for generating and transmitting electric energy in Brazil.

The experience of the Itaipu hydroelectric power plant, which is half Brazilian and half Paraguayan, is considered an international model of cooperation. According to Jorge Miguel Samek, the Brazilian CEO of Itaipu Binacional, the initial investment capital available for building Itaipu was very low. “The undertaking itself pays for the funding through its own generation of electric power. 99.63% of the direct investments were derived from loans and funding. The Brazilian government sponsored 100% of the funds for building the Itaipu Dam”, he tells. The benefits paid to Brazil and Paraguay already exceed the price of the power plant with 13.4 billion dollars in reimbursements. “Brazil wishes to enhance the usage of power sources from renewable energy sources and implement this in countries as a way to help in their development”, indicates José Carlos de Miranda Farias, Chief Executive Officer of the Hydroelectric Company of São Francisco (CHESF).

“CIBiogás intends to become consolidated by 2018, as a national reference of innovative, technological, and business solutions, for the biogas supply chain”, comments Rodrigo Régis de Almeida Galvão, president of the center, who participates in a South-South cooperative program offering training courses to over 700 professionals from Cape Verde, Angola, Mozambique, and Malawi.

“We have begun a new chapter in our history. An agreement for technological transfer has added recognition to the initiatives we have already developed with our partners, especially our partners in Africa”, confirms João Bosco Monte, president of Brazil-Africa Institute. 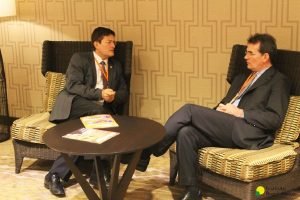 Space for sharing experiences
“We wish to give people and institutions the opportunity to know more and for this reason, we had the intention to provoke this meeting”, explains João Bosco Monte, president of the Brazil-Africa Institute, responsible for the event, who even told about the BNDES sponsorship — Brazilian Development Bank, founded in 1952 and the main instrument of the government for implementing industrial and infrastructure policies, assisting in the process for formulating and reformulating energetic policies and support for the purchase of renewable energy generating equipment.

“In the last five years, 70 projects were funded in Wind Power generation, making Brazil achieve the same level as other countries around the world”, reveals Paulo Roberto de Oliveira Araújo, branch manager for BNDES in Johannesburg. Araújo went to the forum to publicize the BNDES solutions for funding projects in the field of infrastructure.

The 4th Brazilian-African Forum will take place from November 29th — 30th 2016 at the Itaipu Hydroelectric Power Plant facilities, in Foz do Iguaçu. That issue will discuss strategies for the development of agriculture in Brazil and Africa.