Alexandre Keto: The African colors on Brazilian and European walls

In 2011, it was a special time for the graffiti artist from São Paulo, Alexandre Keto, who nowadays is 27 years old. He was invited to participate in a World Social Forum in Dakar, the capital of Senegal, and it was the first time he placed his feet on African soil. He is an African culture scholar, especially on the Banto and Lorubá people, his 11-day trip was profitable in expanding his horizons. “I fulfilled a great dream: I visited Goree Island. The first time was really impressive”, he remembers.

Alexandre, who worked on social projects with children and young people from the outskirts of São Paulo, he believes that art took on a new meaning after that trip. “My work became more colorful. The textile fabrics really impressed me. I was inspired by the Mali and Senegal statues. They were naked human beings. Afterward, my characters were clothed”, he tells. The artist left the NGO where he worked and starting taking frequent trips to African countries. I returned three months later, after my first experience in Senegal and I even started teaching in public schools for six months in Dakar. I was creating works similar to those in Mauritania, Benin, Ghana, and South Africa, always invited by the Brazilian ambassadors. In the following year, I had the opportunity to bring Brazilian artists to teach workshops in African countries. 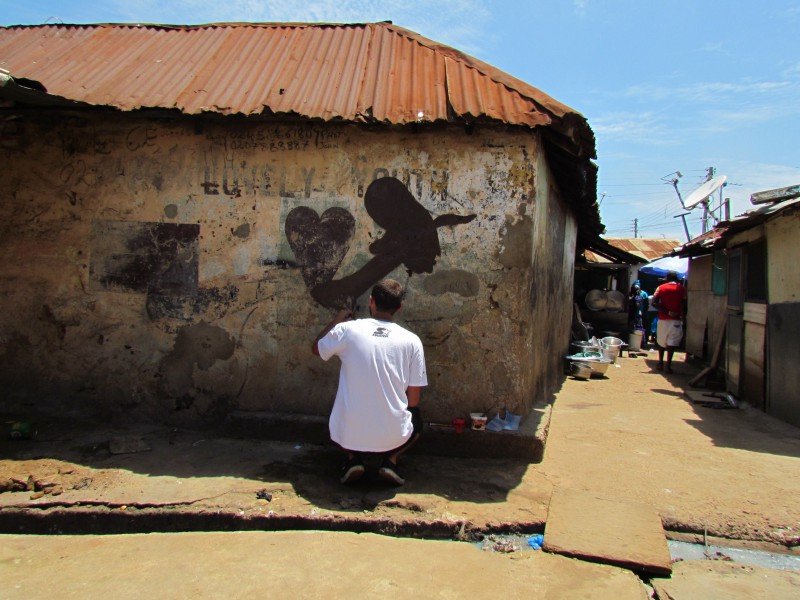 The feminine figure is one of the registered trademarks of the Keto artistic work. “I was created by my mother, besides my two other brothers. For this reason, I have this respect for the feminine figure. I also allude to my African mother, as the continent where everything originated. For this reason, I dedicate my work to the image of pregnant women. There is life there, which makes the continuity to the already existent”, he explains. In order to achieve the diversity of colors and textures my work demands, the artists seeks to mix various different paints and use other materials, such as latex.

Portraying Africa through graffiti is especially important to Alexandre Keto. “I had learned almost nothing about Africa when I was a child. I studied in a public school in São Paulo. We spoke about slavery there and about the history of Egypt, although the country was portrayed as the ‘backyard’ of Europe. I still need to demystify many things about Africa. Every time I return from there, people ask me about starving children, for example. People have that old- -fashioned idea of the continent from the 1990s. What I see nowadays, when I travel there, it is a continent with people who speak various languages and create art”, he reveals. “We need to esteem the African connection we have in Brazil. There are more Afro-people here than in Senegal, for example.

The graffiti artworks of Alexandre Keto inspired in Africa decorate many walls in cities in France, England, and Portugal, as well as in Brazil. “I use the same characters because I seek to reproduce the courses from African coming to Brazil. They depart from Ghana or Senegal, go to Europe and afterward arrive in the Americas”, he reveals. The Keto’s artwork will also be registered at a photographic exhibition being prepared by the artist and his team and it will begin in Salvador in the second half of 2015. “He selected Salvador on purpose, because of its historical importance in Afro-Brazilian culture”, he said. In 2016, the exhibition will travel to other Brazilian capital cities.

A mission: to bring love and faith to Cape Verde