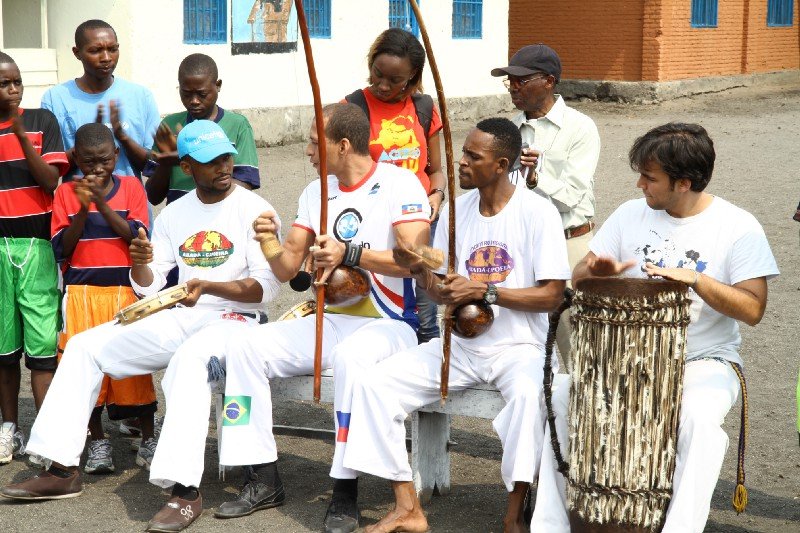 Goma is the provincial capital of Northern Kivu, in the eastern part of the Democratic Republic of Congo. On January 23 rd 2016, twenty children, boys and girls from the ages of 8 to 16 years old, performed a demonstration of capoeira. Among the small audience was Ban Ki-Moon, the secretary general of the UN, who watched the five minute presentation, who was making a quick visit to a UNICEF transfer center. A very short time before his honored visit, the same children who played capoeira in the presentation worked as soldiers serving armed groups who have fighting in this Country for decades. Ban Ki-Moon wanted to see firsthand the “Capoeira Pela Paz” (Capoeira for Peace) project, created by the Brazilian Embassy in Kinshasa jointly with some international partners and to promote capoeira as a manner for recovering self-esteem of the former child soldiers.

Capoeira is a mixture of dancing, martial arts, and music created in Brazil in the XVII century by the slaves who were brought from Africa. At that time, it was used by the slaves to socialize and be reminded of their origins, in a context of complete violation of human rights. Nowadays, the “gingado” (jive) music has been used as a psychosocial tool for strengthening pacific resolution of conflicts, resistance, and social cohesion, reducing violence and fighting against gender inequalities in areas affected by conflict. “In a permanent area of crisis, where the children are exposed to the extreme horrors of armed conflict, it is important to identify an innovative approach to help rejuvenate the body, mind, and soul of the child before family regrouping and reintegrating to their community”, confirms Pascal Villeneuve, the UNICEF representative in the Democratic Republic of Congo.

The children are kidnapped by armed groups and taken to locations far from large urban centers, where they undergo training to become soldiers. While the boys are learning how to shoot and fight, the girls are transformed into sexual slaves or domestic workers. Each one of those children can spend months and years in forced labor inside of these “communities”. The demobilization of these children and their separation from the armed groups, occurs basically in two ways: when they are able to escape or when there is a military attack, by the UN troops as well as the Congolese army, against the camp. So, this is how they are recovered.

“In both circumstances, the children arrive at a village; they tell their story and end up being absolved by the United Nations system or by the army. After that, they are transferred to what is called Transit and Guidance Centers”, details Paulo Uchôa. There is an agreement between the Congolese government and the UN, providing the freed children from these locations and they are placed under the guardianship of UNICEF until the children’s families are found from each one of them. “Sometimes, when these armed groups invade the villagers, they kill the families and the children are completely left alone. In other cases, the child is transferred to another region of the country”, he says. In some cases, the child does not remember who he/she is and the location from where he/she was kidnapped. Capoeira is introduced exactly in this period and then the origin of each child is identified.

“Each child stays from six to twelve weeks in these transfer centers. Therefore, we have a very short time and even so our objectives are very ambitious”, celebrates Rafael Cabanillas, the Mexican capoeira instructor, who is the coordinator of the project in Goma. “Many of the capoeira adepts from my generation are not from Brazil, I discovered capoeira from the movie, “Only the Strong and the videogame Tekken”, he remembers. “In the beginning I did not know that capoeira could have such an important cultural and social impact, I thought at that time that it was only another type of martial arts just like the others”. 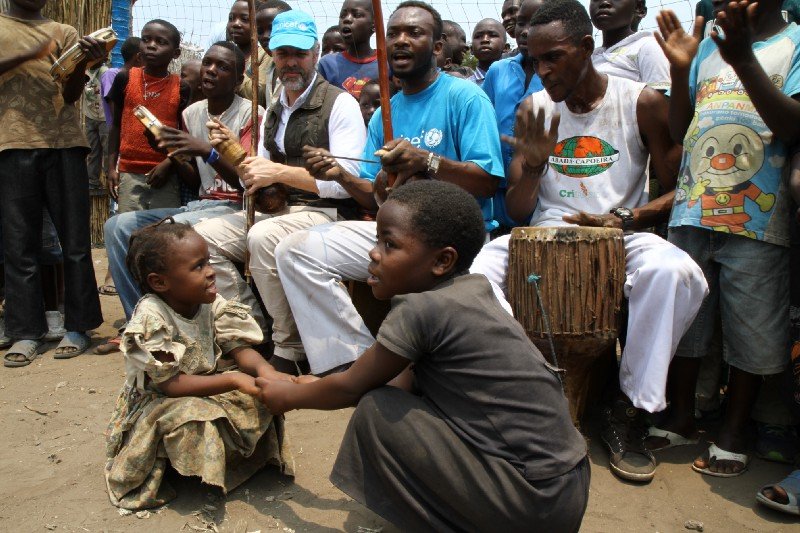 A simple idea, but efficient

The “Capoeira Pela Paz” (Capoeira for Peace) project was created by Paulo Uchoa, ambassador from Brazil in the Democratic Republic of Congo. “I played capoeira when I was a teen. After, when I was already a diplomat in Lebanon, I was part of a capoeira group in Beirut. And when I was in New York, I did not practice capoeira, but I was involved from the point of view in funding and providing resources, for a community named Dance Brazil, run by a capoeira player named Jelon Vieira, who also used capoeira integrated with contemporary dance in the context focused on disadvantaged and vulnerable children in Brazil”, he remembers. When arriving in the Democratic Republic of Congo, the ambassador thought about developing an initiative that could, in some way, contribute to changing the reality of children who live in areas where they face armed conflicts.

The idea began in June 2013 during a dinner with Princess Caroline of Monaco, who presides over AMADE Mondiale, an association focused on subjects linked to children and with the Brazilian general Santos Cruz, who proposed a diplomatic initiative that could leave a Brazilian legacy. “I already had thought of the idea, but I did not know how to put it into practice. I had already sought the help of UNICEF and I spoke about the project. I talked to their representatives, who were already familiar with capoeira because one of their children had already practiced it, and who considered the idea favorable”, he tells. “We started to work together in setting up the program, developing a basic theme and evaluating the feasibility. The project was going ahead and one year later in that first conversation, in August 2014, we launched the project”.

Using capoeira as a way of strengthening children in a situation of social vulnerability is not exclusive to the African country. In Haiti, since 2008, the Brazilian capoeira player, Flávio Saudade developed a similar activity for the underaged soldiers in Port-au- Prince. He was born in São Gonçalo and he grew up surrounded by criminality, “listening to gunshots and neighbors who were victims of armed violence”, as he tells. Through a project developed by a NGO from Rio de Janeiro named “Viva Rio” (Live Rio), Flávio was able to finish his studies while practicing capoeira. He learned to develop social programs there and thus, use capoeira as a social technology. And that is how the “Gingando Pela Paz” (Jiving for Peace) was created. This project was introduced in Zimbabwe and afterwards in Germany, South Africa, Spain, and Ireland. “It began and never ended”, he jokes. “In Haiti, we began the activities with 15 demobilized children from armed groups. In the beginning, I was only going to stay for one year. But, I ended up staying for over five”.

The international experience of Flávio made it possible for him to be invited to provide consultancy in the “Capoeira Pela Paz” (Capoeira for Peace) project. “In spite of the differences of Haiti and the Democratic Republic of Congo, the children from both countries have something in common, the fact that their human relations were lacerated by violence”, he believes. For him, capoeira is only the “backbone” of the project that goes way beyond just a simple transfer of knowledge. The capoeira project is not considered as an expensive, even though; it is an effective social technology in the context of recovering children from a vulnerable situation. “It depends on how far it will go”, Paulo Uchôa, states. Currently, the project is in the expansion phase. “In the first year, it already generated modest results, but encouraging”, summarizes the ambassador. According to him, during the second year, the second year maintained the same proportions as the first year. The third year begins in August 2016, the project will be granted substantial support sources: 700 thousand dollars from the Government of Canada and 100 thousand dollars from Switzerland.

These resources will enable the expansion of the project into two other cities and the hiring of new local professionals. The Brazilian ambassador explains that among the eight current employees in this project, six are Congolese. “The four project monitors in this project come from situations where they were vulnerable children and adolescents. After they fell in love with capoeira, they began to practice and became eximious capoeira players. This is a very large social ascension: for children living on the streets of Kinshasa and now they are United Nations workers”, he celebrates.

“Capoeira saved my life”. This is the testimony of the Congolese Yannick N’Salambo Wouters, a Capoeira instructor. “It took me away from the streets and set me on the right path. The life I live today, I owe to Capoeira”, he adds. Yannick learned the basics of Capoeira from Braz Augusto de Oliveira, a Brazilian teacher who came from Brussels to a cultural festival in Kinshasa, the capital of this African country. After that, in February 2006, he created the Congo Capoeira Association to make it possible for Congolese youths, including children who live in the streets and for them to learn capoeira. “In the capoeira family, we are all equal”, states Dieudonné Mosikikongo, one of the young people. He was baptized in Capoeira as “Ninja”, and he was hired together with Wouters as a monitor for the project in Goma.

The initiative also made the international community pay attention to it. Some Brazilian ambassadors had already sought the embassy in Kinshasa to evaluate the creation of similar projects in other countries. &quot;It really is an original method”, assures Inah Kaloga from the Congo, a protection officer from UNICEF. “We also can have used traditional dance, but we wanted to try something new here to awaken the curiosity of children. We discovered that recently arrived children integrate more easily in the group, as capoeira provides spaces for exchanging and breaking down ethnic and political divisions inherited from armed groups”.

A study performed by UNICEF itself in 2015 revealed that about 70% of children demonstrate greater capacity to express their needs and feel better and 80% consider capoeira as an excellent tool for helping them to administer their stress and traumas. The text concluded that the inclusive nature of Capoeira enables the participation of children who have special needs, helping them to create a climate of inclusion and justice and also improving the quality of living together among children from different armed and ethnic groups. Up to now, 868 children (156 girls and 712 boys) and 8 social workers have benefited from this project. The number tends to grow. That is because the project will be expanded into other areas affected by armed conflicts in the Democratic Republic of Congo.

Winds for future: the ocean, an inspiration for sustainable businesses