Brazil decided to invest in trans-national universities for establishing greater integration in Latin American and African countries so that it could become more inserted in the internationalization process in the first decade of the twenty-first century. The “Universidade Federal da Integração Latino-Americana” (Latin American Integrated Federal University) (UNILA) headquarters is in Foz do Iguaçu (Iguazu Falls), Parana State, is focused on serving young students from Latin America and the Caribbean. The “Universidade da Integração Internacional da Lusofonia Afro-Brasileira” (International Afro-Brazilian Lusophony (Portuguese Language) University)
(UNILAB), has set its goal to promote increased contact with Portuguese speaking countries from the CPLP (Communities of Portuguese Speaking Language Countries), especially in Africa. Both higher education institutions were created in 2010 in order to face the scarcity of public resources and transform that threat into a political-pedagogic project.

“These universities are extremely important, as they reflect a project for society to recognize the importance of cooperation between Latin America and Africa — and other countries from CPLP. These initiatives are very relevant for establishing in Brazil and the processes of internalization and internationalization of Brazilian higher education”, points out Nilma Lino, professor and researcher at “Faculdade de Educação da Universidade Federal de Minas Gerais” (Education College of the Federal University in Minas Gerais State) (UFMG), who was the former minister of Women, Racial Equality, and Young People and the former dean at UNILAB. “Although, they are still in the implementation stage, they have already made a great deal of progress, in its short time of existence, related to its curriculum, examination for acceptance of professors, and guarantee the entrance of Brazilian and foreign students”.

“UNILA and UNILAB were the two most symbolic for making positive changes in the previous decade in Brazilian higher education, especially concerning the democratization of access to the university, as before it was restricted to young people from upper classes. Economic, scientific, and technological development is indispensable in Brazil, as well as the internationalization of higher education are parts of the diplomatic efforts for a country to be recognized and respected by others”, states José Renato Vieira Martins, assistant professor at UNILA and president of the Mercosur University Forum (FOMERCO).

In July, two episodes were widely disclosed by Brazilian press to make the public pay attention to issues on investments in public federal universities, especially regarding the future of UNILAB and UNILA. UNILAB announced it would no longer provide new foreign students an R$530 stipend to help pay for such expenses as food and lodging. That decision would especially harm students from such countries as Guinee-Bissau, Cape Verde, and Mozambique, and it was revoked after strong mobilization by students and professors.

There was a problem regarding UNILA, as there was the intention by a congress member to introduce a proposal for transforming it into another university and to change its purposes from the current ones. Sérgio Sousa, a federal representative, went back on his decision after the academic community articulated and collected almost 16 thousand signatures from a public petition, as well as over 100 support motions coming from diverse domestic and international entities and a manifest signed by 211 former students, who all stood up to defend the university.

The dean of UNILA, Gustavo Vieira, laments that the institution is involved in a context of budgeting stagnation and significant reduction of investments. “We are part of a university in the implementation phase, our spaces are still rented. The absence of investments affects consolidation regarding infrastructure”, he states. “On the other hand, our greatest concern is related to the identity of the university. The entire Brazilian administrative system, somehow is trying to change our federal university to become just like the rest”.

“Defending UNILA above all, is the claim that Brazil has taken on the construction of a regional, fair, and solidary integration project”, Paulino Motter, professor and researcher supports, who is part of the Implementation Commission and who also was an assistant dean at UNILA. “The city of Foz do Iguaçu is in the Western part of Parana State, in Brazil and Latin America will be much better served by UNILA than any other voluntary proposal that may interfere it its international profile and disfigure its integrationist mission”, he adds. 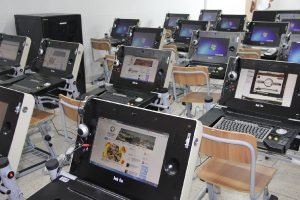 ATLANTICO Magazine personnel got in touch with the dean of UNILAB and he stated that the institution needed to consolidate its physical infrastructure in order to provide sites for housing the planned courses and those which have not yet started and enlarge the courses offered to meet the demands of the region located in partnering countries. “UNILAB does not get any special resource for the welfare of students even though it includes the peculiarity of receiving international students, as they need extra help in lodging, food, and health care”, reveals Lorita Pagliuca, vice-dean at UNILAB.

The source of the problem

18 universities, 422 technical schools, and 173 new campuses were created from 2003 to 2014. Around 7.1 million young people have entered Brazilian universities. That expansion in the higher education system was accompanied by the expansion of the investment for creating new universities. New campuses and new courses were created in existing universities, and they even doubled the number of students. Besides that, the expansion brought social groups to the university who were previously excluded from higher education, low income, indigenous, blacks, and those who live in precarious jerry-built housing. And all this means it is necessary to develop student aid policies to guarantee the permanence and conclusion of their studies.

However, the budget underwent contention beginning in 2014. Those budget cuts started to affect the maintenance, scholarship aid payments to students, basic expenses, such as security, lighting, cleaning, and other basic necessities for routine activities. The situation became even more critical for institutions that have not yet been consolidated, such as UNILA and UNILAB.

“There are nowadays, universities closing laboratories, suspending research projects, and many times state-of-the-art research studies that could rank Brazil as leaders in a given field of research. Projects are being discontinued due to the lack of resources, equipment, and maintenance on existing equipment”, laments Emmanuel Zagury Tourinho, who is the president of ANDIFES and dean of the “Universidade Federal do Pará” (Para State Federal University) (UFPA). According to him, no matter how much effort is employed in improving administration and prioritizing initiatives, the available resources are always insufficient for covering all the financial obligations. “All the administrators have made great efforts to use the available resources as best as possible. We are seeking negotiations with the federal government and Congress and we are speaking with society at large”.

“This is a difficult context and we are not able to perform effective administration”, says Gustavo Vieira, dean of UNILA. “There are dialogs taking place on various fronts: at the parliamentary meeting tables in the Congress for the purpose of parliamentary amendments in order to supply funds for the university and the Education Ministry, showing the peculiarity of UNILAB, to continue in fulfilling its targets for growth and consolidation”, explains the vice-dean of UNILAB, Lorita Pagliuca. The medical course has already been authorized that was created by the university but there is still no
defined date for its implementation.

Nilma Lino, who was the former dean of UNILAB, views the current situation of public universities very fearfully. “This government decided and backed by the National Congress, approved a national amendment to freeze public expenses for 20 years, in three priority sectors for the development in the country and thereby making dignity possible for citizens, such as health, education, and welfare, thus there is little hope for the development of public universities”, telling her critique. José Renato Vieira Martins, in turn, also denounced this as political and ideological attacks. “UNILA and UNILAB correspond to domestic interests and they were inspired by universal values of peace and human rights. It is unthinkable that a long term project that is so strategically important to Brazil is threatened to be done away with. However, that is what is happening”, laments the Brazilian educator.

Unila and Unilab in numbers

How CPLP is helping East Timor to invest in education