Embraer commemorates the delivery of the first E175 jet ordered by Mauritania Airlines. The company signed an order for two models of the aircraft, worth US$ 93.8 million. The company will be the first African to operate the E175, which has 76 seats. “We are confident that the E175 will achieve the same success on the continent in other markets around the world and is recognized as the best aircraft in the 76-seat segment,” said Raul Villaron, Middle East and Africa sales director for Embraer.

Mauritania Airlines is the leading airline in West Africa and with the acquisition of these two new aircraft the company is planning to renew its fleet. “The introduction of the E175 to the fleet will allow us to add frequencies and new destinations while improving the passenger experience, offering more comfort and the best cabin in this category,” said Mohamed Radhy Bennahi, CEO of Mauritania Airlines. 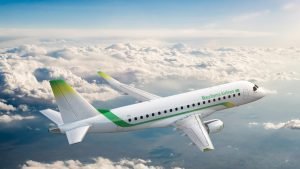 According to Embraer estimates, the African air transport market is expected to grow close to 5% by 2037, which is expected to reach 400 million passengers on the continent. “To meet Africa’s needs for properly sized aircraft, Embraer’s priority is to continue to grow its customer base on the continent, and this growth will come with E-Jets,” argues Raul Villaron.

Embraer is the world leader in the manufacture of commercial jets with up to 150 seats and intends to invest in them for further insertion in Africa. The company’s fleet has increased from 40 to more than 150 aircraft operated by more than 50 companies in the continent.