Jorge Chediek, Director of the United Nations Office for South-South, speaks at the opening of the 6th Forum Brazil Africa 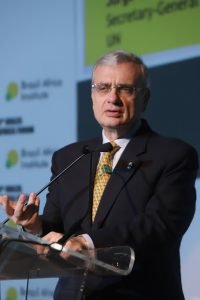 In his speech, Jorge Chediek said that Cooperation is willing to promote youth empowerment in Africa and in Brazil regardless of the current social and political environment that is being experienced in the region, given that nine out of ten young people living in the region do not have opportunities at the national level. According to the Director, it is necessary to create elements to change some aspects to change the current situation and share them with other countries.

He explained that driven by the principles of equality, the policy of non-interference and self-confidence among the countries of the South, the South-South Cooperation has been very successful. Examples can be recognized in Brazil, India, and China, where they succeeded in getting many individuals out of extreme poverty.

“In South Africa, we saw Mandela free. Southern countries have gained confidence in themselves and have begun to use their resources more sustainably. They started to trade more among themselves”.

For Jorge Chediek, economically,  the South has a strategic importance in the global architecture. There is a huge debt that has to be reduced. Socially, there is a considerable inequality level between people and we have now the great opportunity to address such issues in the South-South level. Moreover, we have the chance to strengthen the South-South cooperation to face the differences that exist between the member states of the South. We could do it by increasing engagement between every stakeholder because there is the need for collective action to tackle such international challenges.

At the end of his speech, the director recommended the existence of future forums to celebrate the success of cooperation between Brazil and Africa. For Jorge Chediek, being in Salvador, one of the largest cities in America, is an imminent question that the ocean should not be a divisor, but a symbol of friendship and unity.

The new hunger map, according to FAO