Maria da Penha: the law was named after this woman

Law 11,340 was sanctioned in Brazil in August 2006, most commonly known as the “Lei Maria da Penha” (Maria da Penha Law), as this increased the strictness of punishments for aggression against women; when they take place in domestic or family environments. This law was named after a woman who is a pharmaceutic professional, who, nowadays is 71 years old, a leader in the movement for defending women’s rights, who are the greatest victims of domestic violence in the Country, as well as leading an institute named after her. Her three daughters helped Dona Penha, as she prefers to be called; she displays permanent marks of a family tragedy: that took place in 1983; when she became paraplegic after suffering two attacks from her husband at that time. Afterwards, she had to fight in the courts, so that her aggressor would be punished. “Violence against women exists because men were educated to be violent”, she believes. “How can they think they are wrong if they saw a grandfather hitting a grandmother and their father hitting their mother?”.

But Dona Penha was determined to change that reality. At the time, there were not even specific places to take care of women victims of domestic violence in her home state, Ceará, in Northeast Brazil. Nowadays, after more than a decade since the Law was created; the subject is not just being discussed by the population, but the State itself has increased its investment in specific public policies for defending women. “Women have begun to believe in the institution and the enforcement of the law, favoring that accusation. But, it is clear in cities where there are no means for women seeking information or making an accusation, men feel freer to practice violent acts”, Maria da Penha believes. 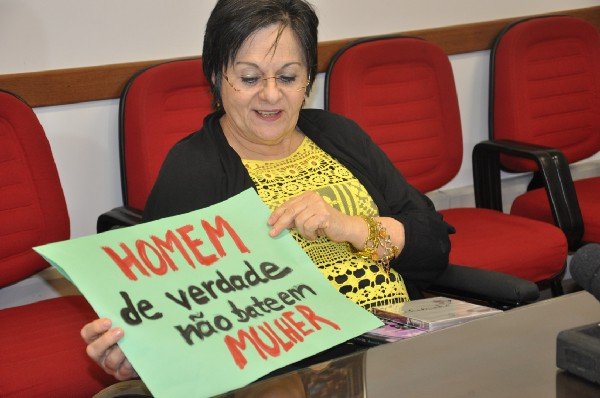 In spite of the achieved advances, there is still a great deal to be done. “It is still not acceptable for a woman to be assassinated because there was no police station in her town, at least a center of reference, so that she could get psychological, social, and legal attention”, she laments. “The small and medium-sized cities are not even able to get a center of reference so that women can be taught to know their rights, or watch a lecture”.

Parallel to the fight for increasing care to women who suffer as victims from violence, the Maria da Penha Institute has invested in educational initiatives. The Maria da Penha Law was published as “cordel” (string literature) for children, a type typical literary genre of the Northeast of Brazil. It was translated to English, Spanish, and Braille; the material has been introduced in schools in various regions around Brazil and two Portuguese speaking African countries: Cape Verde, Sao Tome and Principe. Another course was created for young people, which is also offered to community leaders. “It is not possible to change any culture without improving educational understanding”, she states.

Maria da Penha is not so concerned regarding the conservative trend plaguing the world, even in Brazil. She believes feminine representation is going to promote more visibility to these gender issues. “There are increasing numbers of women in our legislature. I hope these women run for office in order to become more present and so their wishes can be met”, she says. “There are also men who support women’s rights. Many of them have friends or relatives who have been raped or assassinated. And so, we get support from these men”.

She also believes that only the strengthening of the State can help to decrease violence among women. “In this male chauvinist culture, when a woman is a victim and suffers from violence, she thinks that the husband has the right to do this. And

And this needs to be deconstructed.”, she comments. “And this is only broken down when the public administrator fulfills his/her Governmental role. I have heard women say that when the neighbor was put in jail, her husband never raised a hand against her”.

In 1983, Maria da Penha’s husband, Marco Antonio Heredia Viveros, a Columbian teacher, tried to kill her twice. The first time he shot her, simulating an assault and on the second he tried to electrocute her. Penha became paralyzed due to the aggression she suffered. Eighteen years later, her aggressor was sentenced to eight years of prison. Then, by ways of legal legal instruments, he spent only two years in prison. He was released in 2004, nowadays he is free.

The episode got to the Human Rights Commission of the Organization of American States (OAS) and it was considered for the first time, as a domestic violence crime. The report was registered in the book “Sobrevivi… posso contar” (I Survived… I can tell my story), published in 2010.

The Brazilian Women’s House is a center for humanized care for women that offers essential services in just one location specialized to treat the most diverse types of violent crimes against women, such as reception and screening, psychological support, Women’s police unit, Court, Public Prosecutor, economic empowerment and toy library . “Supplying excellent care is complex”, praises Maria da Penha. “And this facilitates the life of women”.

The support center units are already existing in Campo Grande and Brasília and others are being built in São Luís, Curitiba, Fortaleza, Boa Vista, and São Paulo and another six are in the bidding process, according to the Secretariat on Special Women’s Policies, an entity in the Ministry of Women , Racial Equality, and Human Rights, created in 2003. Presently is linked to the Ministry of Justice and Citizenship of Brazil.

The third best law in the world

The United Nations considers the Maria da Penha Law as the third best law on fighting against domestic violence. The Spanish law was considered better, as it defines integrated protective measures against gender violence and enforces school subjects beginning in elementary school and up to university courses. Then the Chilean is the second, as it seeks to prevent, punish, and eradicate domestic violence and provide protection to victims, especially women, elderly, and children.

Eliana Alves Cruz and the story of all of us

Nilma Lino Gomes: The minister of the equality