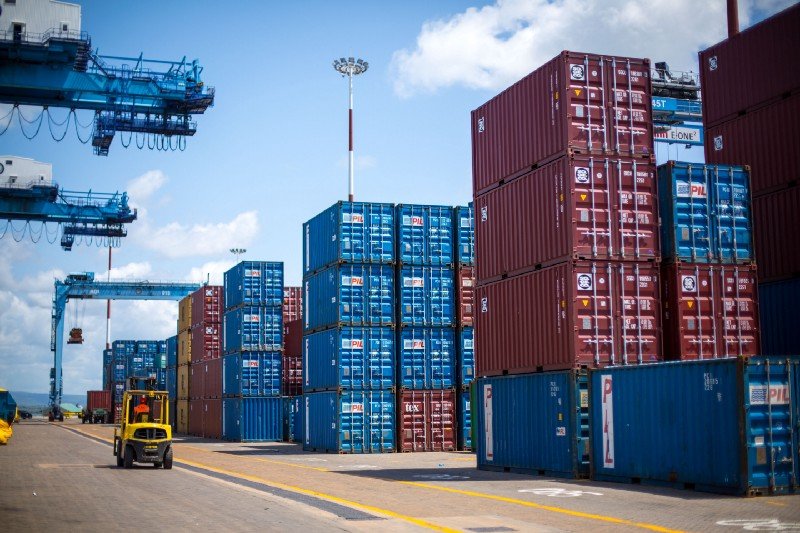 Aliceweb data is a system for analyzing Foreign Trade Data of the Ministry of Development, Industrial and Foreign Trade and it shows Africa represented only 5.89% of the current Brazilian trade in the year 2014, compared to 19.54% to the European Union and 17.16% to Latin America. Conversely, the trade from Africa was calculated to be around US$ 1 trillion per year, and only 3% of that is derived from Brazilian participation. Brazil has the potential to increase its share of business to that continent. But for this, it will be necessary to overcome an important obstacle: solve a logistic bottleneck involving, above all, the ocean shipping costs between Brazil and the western African coast. Goods shipped from Brazil take around forty to sixty days to arrive in Africa and the cost is extremely expensive.

“The cost is high because the volume is very small. The vessel sails full and when it arrives there, there is practically nothing to ship back. And this ends up interfering regarding the shipping costs. You have to consider the return trip of the vessel that ends up being diluted in the price”, explains Rui Mucaje, president of the Afro Brazilian Chamber of Commerce, so let’s make a comparison to China. Just like Brazil, the Asian country buys commodities from Africa. But, contrary to Brazil, China sells the African products at a higher added value price. That imbalanced resulted, in a deficit trade balance for Brazil in the year 2014, in its trade relations with Africa was around US$ FOB 7.36 billion, based on the data supplied by the Brazilian government.

“We buy from Africa is about 95% petroleum and fertilizer. And what we sell to Africa is chicken meat, sugar, and grains. These goods correspond to about 60 to 70% of our exportations to Africa. So, roughly speaking, we buy petroleum and we sell food”, argues Altair Maia, consultant of foreign trade. “We are deficit. In the field of commodities, it is difficult to expand this without having a foreseeable result in the volume of exportations. Even, furthermore, as the price of commodities is decreasing around the world. For Brazil to achieve a surplus in the trade balance, it would be necessary to export manufactured products to Africa, such as footwear, clothing, furniture, automobiles, and everything else. Practically all the countries on the western African coast import 50 to 90% of everything they consume”.

Besides promoting the exportation of higher added value products, bilateral trade agreements can also ameliorate the ocean shipping costs between Brazil and Africa Currently, the only applicable bilateral trade agreement for ocean shipment involving Brazil and an African country was agreed to with Algeria, in the year 1976. But, there is an ongoing proposal for a trade agreement with Angola. Antaq — the National Agency of Waterway Transportation was sought out by ATLANTICO- and they reveal that they have followed up the international trade relations of Brazil regarding ocean shipping and collecting and analyzing statistical data on port transactions, container transactions, and the amount of long haul shipments, as well as participating in forum discussions and meetings related to this subject. 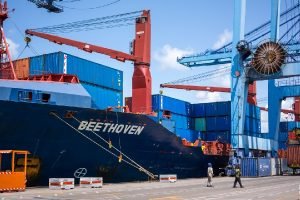 OVERALL GLOBAL SHIPPING OF CONTAINERIZED CARGO TO AFRICA INCREASED BY 7.2% IN 2014, AS COMPARED TO AN OVERALL GLOBAL INCREASE OF 5.4%.

Regarding this, leaders in diverse productive sectors are expecting to formalize some trade agreement to create a direct shipping line between Brazil and Africa. “This would favor Congo, Angola, and Equatorial Guinea that have a great deal of investments in Brazilian companies”, Vilton Lima points out, president of the Congo Business Chamber of Commerce, Industry, and Agriculture, who supports Point Noir becoming a hub for the countries of Central Africa. “We have a deep port (harbor) there, with a good infrastructure. The port has undergone renovation worksites for improving the capacity for mooring large scale vessels”. Rui Mucaje, from the Afro Brazilian Chamber of Commerce, he supports the creation of ocean shipping lines between Brazil and the African continent and prioritizing the port of Walvis Bay, in Namibia, and Las Palmas, in the Canary Islands. “Practically all the goods shipped from Brazil, goes though there. That port is already a hub and it can be intensified even more”, he said. “There is an extremely large idle capacity due to the decreased number of vessels from Brazil to African destinations and the increased Asiatic presence in Africa”.

Another solution would be for the vessels sailing in the Atlantic between the Americas and Europe and between Europe and Africa to make a stopover at some port along the western African coast. “All the international shipping of Brazilian goods is done by foreign companies. Thus, we are completely at the mercy of these companies”, Altair Maia, consultant, points out. “When a vessel leaves from the Brazilian seacoast towards Europe, it sails by at least 500 miles of the African continent, where although, it does not make a stopover. Then, it would be necessary for these companies shipping these goods to discuss the costs and benefits of the vessels departing from Brazil to moor in Africa and then to continue their voyage to Europe”, he reveals. Then, in one way or another, an ocean shipping line between Brazil and Africa would strengthen — and a great deal — the business relations between the country and the African continent and thereby achieve a drastic reduction in the logistic costs and also in transit time. Then the goods leaving Brazil would only take eight to ten days to arrive in Africa.

The acronym FOB means free on board. In this type of shipping, the buyer takes on all the risks and costs for the shipment of the goods, thus the buyer is responsible for the goods as soon as it is placed on the vessel. It is the responsibility of the supplier to place the goods onboard, at the port of departure as designated by the importer.

AfCTA: Ministers of Trade pave way for the operationalization