The memorandum signed between Brazil Africa Institute, NEPAD and LULA Institute aims to strength the relations between the country and the continent

Three important institutions that think and act on the development of Africa decided to join forces. Instituto Brasil Africa, Lula Institute and Nepad — the acronym for the New Partnership for Africa’s Development — signed an important memorandum of understanding (MoU). The document, prepared from a mutual agreement between the three institutions summarizes the intentions of the authorities in the development of joint projects aiming to strengthen the Brazil-Africa relations before the international community. 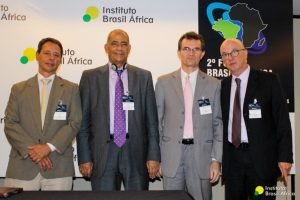 The MoU speaks of sharing strengths, skills and resources. Also addresses fundraising and resources for implementation of projects. For this to occur, the document provides that the parties should meet formally at least twice a year to design and implement work plans for the implementation of activities. In addition, the establishment of mechanisms will be required for monitoring and evaluation of activities and projects that will be implemented from now.

According to the president of Instituto Brasil Africa, João Bosco Monte, the value of the partnership is invaluable. “When we disclose that three institutions come together to consider joint strategies, this information reverberates and so other institutions will say they want to be associate with them. The Brazil Africa Forum shows our joint capacity and the agenda that we have proposed, which has a synergy with the African Union and NEPAD.

Bosco Monte points out that the pursuit of poverty reduction is a common challenge to the three institutions. “The genesis of the activities of Instituto Brasil Africa is the discussion of alternatives to the economic development of Brazil and Africa. So we have a number of agendas that culminate in this principle, such as reducing poverty, eradicating hunger and child labor, in addition to the reduction of illiteracy. So from now on, we need to sit to see what each has priority agenda of these fields and from there to identify projects that work together”, he explains. Based in Fortaleza, Ceará, Instituto Brasil Africa is a non-profit organization created in 2013 to be a link in promoting the interests of Brazil and African states.

Lula Institute, based in São Paulo, has been performing since its inauguration in 2010, a series of events in Brazil focused on Africa, bringing together academics, politicians, business and civil society. The Institute also seeks to build a broad network of contacts with governments and multilateral organizations of Africa, as the African Union, the African Development Bank and the Economic Commission for Africa, which has helped to guide its actions.

In one of these meetings, held in July 2013 in Addis Ababa, Ethiopia, was agreed on a compromise between the African Union, FAO and the Lula Institute to eradicate hunger in Africa by 2025.

The document that formalized the creation of Nepad was signed by leaders of five countries (Algeria, Egypt, Nigeria, Senegal and South Africa) in July 2001 during the 37th Summit of the Organization of African Unity, held in Lusaka, Zambia. The idea is to that Nepad serves as a model for the development of Africa in the 21st century. In June 2002, during the Summit of the African Union in Durban, Nepad presented a plan of action with these main purposes: eradication of poverty and growth and sustainable development. Also, were identified as challenges, halt the marginalization of Africa in the globalization process, accelerate the empowerment of women and the full integration of Africa into the global economy. The Nepad executives defend the need to reduce business risk profile in Africa in order to create favorable conditions for investment and thus increase the competitiveness of the continent. 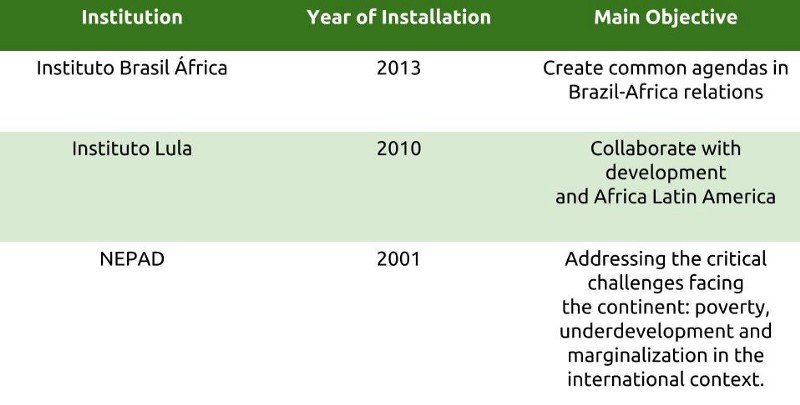 New partnership ensures the fight against the Multiple Burden of Malnutrition

Brazil Africa Forum 2019 will discuss the future of agriculture