The creative economy was the central theme of the second session of the 6th Forum Brazil Africa, held this Thursday, November 22, 2018. With the mediation of TV journalist Camila Marinho, the debate was attended by Paulo Rogério Nunes, CEO of Vale do Dendê; Monica Monteiro, CEO of CINEGROUP; Márcia Ganem, CEO of Ateliê Márcia Ganem; Igor Juaçaba, CEO of Elephant Coworking and; Nina Silva, Founder of the Black Money Movement.

Paulo Rogério Nunes started the conversation speaking about the current situation of the creative economy, with a special focus on the emergence of services from the creativity transformed into a new business. Speaking from an entrepreneurial perspective, in Bahia, there is a huge potential that has not been recognized yet. Our goals are to make to make Salvador a global city, connected with a market that has a deep connection with Africa. As he said, “The Brazil Africa connection will only effectively happen, when Afro-descendants, who have entered universities and want to do trade with Africa, are heard and taken into consideration in debates like this”. 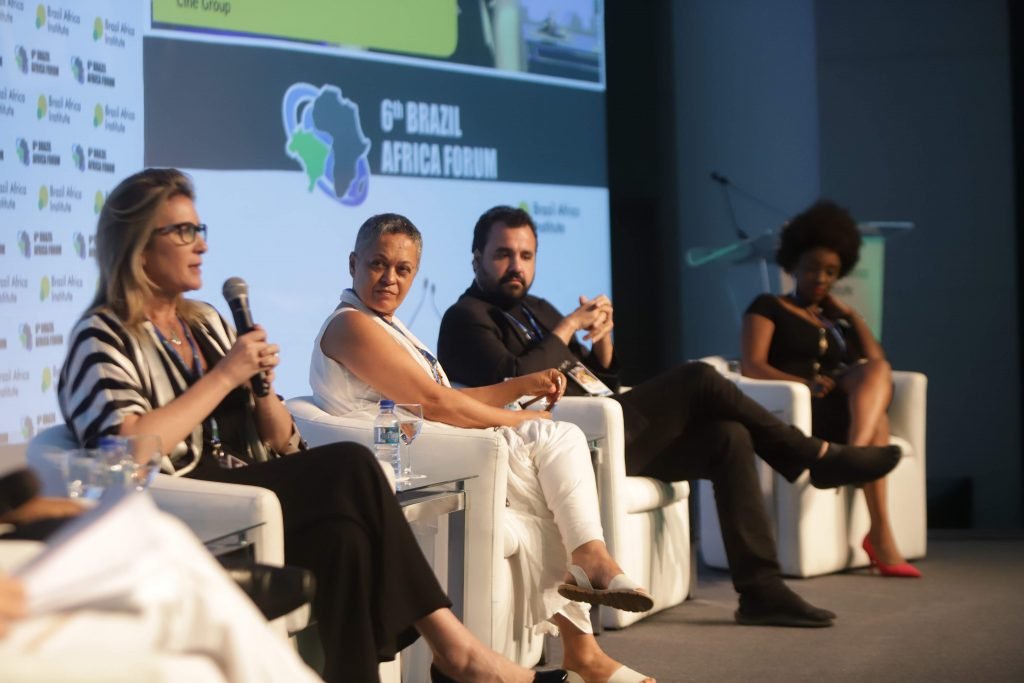 For Monica Monteiro, a Brazilian who has been in Africa for 12 years as a representative of CINEGROUP, there is still a lot to be done and encouraged in Africa. According to the businesswoman, there is no better way of doing business than knowing the country where it is inserted.

On the other hand, Márcia Ganem suggested investing in an economy that embraces people and culture in general. The stylist stressed that we need a logic that is not only capital but one that prioritizes human development.

“Certain traditional communities live under poverty. What’s new in the creative economy is imagining a design that will dialogue with our traditional roots”. According to her, in Bahia, culture has divided the state into identity territories that, beyond fashion, offer experiences of implementation of spaces of memory, contemplating all the aspects of different communities. This creates a range of alternatives and opportunities for cultural endeavors.

Igor Juaçaba, CEO of Elephant Coworking, explained about the way companies work today. They target countries that are up and trying to copy what they are doing. For the entrepreneur, the emerging countries, especially Brazil and the countries of Africa, have a great opportunity to make different from the existing models. According to him, there are resources, self-sufficiency and few countries that have the same conditions. The ideal, he said, would be not to copy, but to do what has not yet been done. “One of the foundations for this comes from education. Brazil and Africa are big territories that end up looking deep inside, which means that we have a limitation of market coverage and connections.”

Completing the team from the last session of the morning, Nina Silva talked about the importance of working with real opportunities to support inequality, which generates exorbitant numbers.

“When we think of technological poles, we think of Eastern countries and forget that all technology must be a real impact on a group’s life. And these technologies are created in spaces that are not inclusive, do not think with diverse heads. The more inclusive enterprises in relation to gender profit 21% more, globally speaking, “he said. According to Nina, founder of the Black Money Movement, which encourages the consumption of the Brazilian black population, according to the global data, companies with greater ethnic-racial diversity profit 33% more.

Egypt keeps its economic goals in spite of COVID-19

Ulrich Sabel-Koschella: Collaboration is essential for development in Africa