The power of black dolls in the world of children Brazil is the fruit of miscegenation. Indians, Europeans, Africans, and Orientals formed the “Brazilian people”. According to IBGE, the Brazilian Institute of Geography and Statistics, 55% of the Brazilian population consider themselves blacks. Despite their majority, blacks in Brazil suffer from a lack of representation related to the little or no presence of black characters extolled in the history of the country and this begins in childhood.

A doll, for example, can be seen by a child as a mirror of his future. The Brazilian toy market, however, is almost all white. In a campaign carried out by the NGO “Avante” (Go Ahead) called “Cadê nossa boneca?” (Where is our doll?), it was found that only 3% of dolls marketed by Internet in Brazil are black. The study analyzed the collection of stores associated with Abrinq, “Associação Brasileira de Fabricantes de Brinquedos” (Brazilian Association of Toy Manufacturers), and within this universe studied three big online stores, Walmart, Rihappy, and Americanas.

“We understood that the percentage of manufactured dolls, in all, was 9% and that percentage fell when we went to trade. There are many manufacturers who are not able to make black models disseminate”, laments Mylene Alves, one of the coordinators of the campaign.

The decreased number of toys representing the black community in Brazil has influenced the appearance of doll makers. “Dolls provide a series of meanings and possibilities for playing, arising from role playing, whereas there is direct identification (which means, I am the doll), as it may be of the identification of the other”, says Mylene. 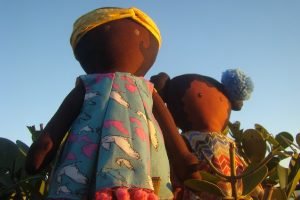 Lúcia Makena, one of the country’s top doll makers in the country, began to produce black cloth dolls, after seeing a model in a magazine. “I saw myself represented in that image and from there, I decided I could start making dolls”, she remembers. She is a public school teacher in São Paulo, Lúcia used black dolls as a tool for debate on racial issues.

According to Lúcia, the doll maker, society still sees a doll as a simple toy and forgets its influence on children’s lives. “When we come with these dolls, we are concerned to contribute to the formation of the girl’s identity. We try to make dolls that bring this representation”, she reinforces.

The Makena dolls follow a pattern that works to deconstruct the aesthetic standards imposed by the media. Black fabric, curly hair, large, body with no waist definitions and African ethnic prints form toy. The main objective is to stimulate children’s creativity and thus to work on the representative issue.

Mylene says, dolls are pedagogic and playful objects that allows the child to understand social roles. “It is the representation of a person, of a being, so we speak of a model of people. This makes me recognize the other who is different from me, take care of this other person, and understand that this other person is like me”, she adds.

Queens of Africa, success was born from assertion

Develop by the Nigerian Taofick Okoya in 2008, the Queens of Africa are the success of black dolls on the African Continent. The idea came after Taofick did not find the right dolls on the market to give away to his niece. as a gift for his niece. Meanwhile, he had been questioned by his daughter about her skin color and her desire to be white. “I therefore decided to create a brand that would help black children recognize themselves in the color of the dolls with characters that are just like them and who want to be the same without it being impossible”, explains the entrepreneur.

When released, the Queens of Africa were not well received by the public. Taofick then created, an awareness campaign about the psychological importance of dolls in self-recognition of children. “When one starts to understand, by playing, that there are other people in the world who are the same as you, but because of the geographic location they are different, it is easier to make them less resistant to others”, he says.

The dolls were thought of in three shades of skin because, according to Taofick, during the production, it was realized that not even in the African continent they are equal. This line of toys created by the entrepreneur uses not only dolls, but books, music, and animations as instruments of child empowerment. 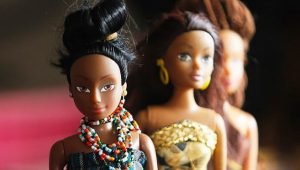 In addition to Queens of Africa, the entrepreneur manufactures the Naija Princesses and, unlike the Makena dolls, the Nigerian dolls are similar to the Barbie style. They are tall, thin, and with African characteristics. As Taofick informs, each doll represents a tribe of the African continent. Thus, African children and/or those from African descendants may mirror their ancestors, their beauty.

Unicef needs for US$1.6 billion to help children impacted by COVID-19 pandemic

Resilience, love and faith for the children of Madagascar

Identity and the strength of afro hair