Contrary to what many people think, wireless does not make the majority of technology instantaneous international communication possible. In reality, 99% of transoceanic communications are made possible thanks to undersea cables interconnecting continents. And they are starting to recreate a route that in the past few decades has been exploited very little: the southern part of the Atlantic Ocean. 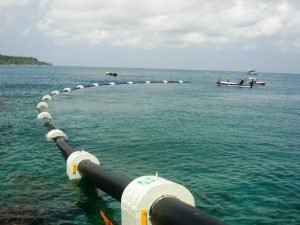 Starting in the decade of the 1850s was when a telegraph cable first connected North America to Europe, then they multiplied, and nowadays they are fiber-optic coated, thereby assuring greater durability. However, communication from Brazil to the rest of the world depended on the United States for many years, as all the operating Brazilian cables “stopped” in the USA,  and routed to other continents.

That reality is already undergoing changes. Due to the inauguration of new undersea cables in the South Atlantic, Brazil now has direct links to Africa and alternative routes to Asia and Europe.

In 2018, two cables began to connect Fortaleza to the African continent: the SACS (South Atlantic Cable System) that would go to Luanda, in Angola; and SAIL (South Atlantic InterLink), reaching the city of Kribi, in Cameroon.

This interactive map shows all the undersea cables connecting the world.

For Adalberto Pessoa, who is the president of the “Empresa de Tecnologia da Informação do Ceará” (Ceará State Information Technology Company) (Etice),  it is already possible to notice improvements in the Brazilian connection to Africa. “The communication capability of Africa to Brazil and vice-versa has improved substantially. Previously, in order to get access to any contents on the African continent, the data access delay was significantly greater. So, in fact, the connection has improved, and not only the connection to Africa but also to Europe”, he explains.

The new fiber-optic cables will connect Brazil to the rest of the planet in the next few years. The Ellalink is already being constructed. It is a cable going from Santos to Fortaleza, so that it will cross the Atlantic Ocean to Portugal and Spain, using the connection to Cape Verde. Putting this project into effect will cost over USD $200 million.

The Brazil-Africa connection will also be utilized by SAEx (South Atlantic Express), connecting South Africa to the United States, with a connection in Brazil that will cost an estimated USD$480 million and forecast to start operating in 2020. There is also a second phase in this project, going from that African country to India and Singapore that will cost around USD$ 300 million. This connection will also provide a shorter route to Asia.

The majority of these cables will go through Fortaleza, as it is situated in a strategic position. The Ceará State capital is positioned as a hub for undersea cables. “In fact, the geographic location of Fortaleza is very special, as it is not only a location for data connections but also to harbors and airline connections making it a multipurpose hub.  Its position minimizes access times and data traffic delays involving Brazil and other continents”, confirms Adalberto Pessoa.

Angola Cables, an international undersea cable operator, is seeking to take advantage of that position. The company is responsible for SACS and one of the Monet investors (the Google cable connecting Brazil to the USA) is building a Tier III type data center in the city, a 3,000m2 structure – which is an international certification standard. The company estimates that this undertaking, when it is completely operating, can generate 50 direct jobs, 700 indirect jobs, and countless digital undertakings.

The framework will also be neutral, which means, it can connect to any cable arriving in Fortaleza, not only the ones from Angola Cables, making Ceará State become an important international hub.

Angola Cables and Etice have recently closed a deal that will provide the Ceará State company access to this Data Center framework, thereby creating conditions so the region can benefit from this modern undertaking. “Angola Cables, due to its international connection and investment and Etice with its data communication infrastructure in the inner state region will make an extremely power-packed partnership”, states the Etice president.