The strategic strength of a military alliance

Atleast 6,820 kilometers (4,238 miles) separate Brasília from Windhoek, the capital of Namibia. That distance, however, has been decreasing in the last decades due to a navel cooperative agreement signed by both countries in 1994 and renewed in 2001. “Brazil and Namibia promote the same universal values, expressively defined in both Constitutions. Which is as follows: the military cooperation between the two countries foments other broader fields of common interest”, states Guilherme Souza Dias, Defense Navel Attaché, of the Brazilian Army and Air Force in Namibia.

Namibia is a relatively young nation — it became independent from South Africa on March 21st 1990. At that time, the country did not have any defense force and for that reason, it needed to start being prepared at that time. In 2016, Brazil and Namibia completed 22 years of cooperative work. “The cooperative results can be considered as satisfactory for both countries”, states Dias.

After the preparation of a nucleus of officers at the Brazilian Navy training center, it was possible for Namibia to create its Navy in October 7th 2004; 10 years after the first four officer-students started their studies. Considering the entire bilateral cooperative period, the Namibia Navy has already taken over 1,500 courses in Brazil, thus, the African country has already trained a significant portion of its personnel in its Navy in its own country. In the field of Defense material, Namibia has already purchased new equipment from Brazil, similar to what our own Navy uses, as this has favored its military-navy capacity and contributed to fomenting the national defense industrial base.

The supervisor of the Research and Study Group on International Conflict at the São Paulo University (USP), Sérgio Luiz Cruz Aguilar, also emphasizes the importance of the Brazilian diplomatic agreement. According to him, agreements like these are important because the country maintains good relations and shows power in one of the priority areas of defense in the Southern Atlantic region that also includes a large portion of the African coastline. “It is an asymmetric relation: Brazil supplies materials, expertise, and training to Namibia and in exchange, we have good relations and support from them on our interests in multilateral jurisdictions”, he states.

For the researcher, defending the Southern Atlantic Ocean region is fundamental for the maritime trade of Brazil that is utilized in the entire or in part of that region. “Instability in parts of the world, such as in the Mediterranean and the Persian Gulf can increase the importance of the Southern Atlantic Ocean as a shipping route. Besides that, the discoveries of wealth, especially in the subsoil (as in the pre-salt layer) can generate foreign interests against which, we have to be prepared”, he defends.

The White Book of National Defense was published in 2012, a document prepared by the Brazilian government for defining Defense strategies in a medium and long range period, and this document points out that the Southern Atlantic Ocean region as vital for Brazil, since 95% of all foreign commerce of the Country (Brazil) is by vessels. “The Brazilian Navy individually actuates in combating illegal activities in its jurisdictional waters and in the Southern Atlantic Ocean, according to international conventions. The Brazilian Navy supplies instruction, courses, and training to African Navies for this purpose, always in common agreement and in cooperation with each Navy”, explains the Rear Admiral, Flávio Augusto Viana Rocha.

Since the 1960s, the Brazilian government has been following up the Independence process of Namibia. The most expressive act for supporting the African country took place in 1987 while still exiled, Sam Nujoma, who is considered the Founder Father of Namibia, was received by the Brazilian President at that time José Sarney, with honors as the Chief of State. Afterwards, in December 1991, Fernando Collor de Mello, the President at that time, visited Namibia, opening the pathways for developing cooperation in various sectors.

Brazil also played an important role in the post-independence period. In February 1994, the Brazilian Navy sent “Niterói” Frigate to participate in the festivities at the Walvis Bay Port in South Africa to Namibia, which was the last pending item related to its independence process. The “Niterói” Frigate was at that time, the first foreign vessel to visit the Namibian port; it remained in Walvis Bay from March1st to the 5th. The Cooperative Agreement between the Navies was signed at that time. “That exemplifies the joint and harmonious action of the two fundamental Brazilian institutions in our country actuating in the international field: The Foreign Relations Ministry and the Brazilian Navy”, states Guilherme Souza Dias.

“There are two qualities favoring the strengthening of diplomatic relations between Brazil and Namibia: the Namibian people seek to establish a long-term structured relation of mutual trust and Brazilians are people who seek a cooperative relation, thus both parties reap benefits from what is being constructed”.

Other Benefits for Brazil

In the economic sphere

The Inace shipyard was constructed from 2009 e 2010, a ship patrol and two boat patrols for the Namibia Navy, similar to the existing vessels in the Brazilian Navy. The continued efforts of the Brazilian Navy to achieve a serial production of vessels enabled gains in the scale and consequently, reduced production costs and increased industrial activity in its industrial center.

In the social-cultural sphere

Namibia is a member of the Community of Portuguese Language Countries (CPLP) as an observational member. About 30% of the population in the northern region of the country speaks Portuguese naturally, due to its proximity to Angola. Due to the preparation of Officers and Namibian Corps in Brazilian, a majority of the Namibia Navy is fluent in Portuguese; as that also opens up opportunities for improve cultural and commercial exchanges.

1614 military graduates have already graduated in Brazil among Officers and Navy Corps in Namibia.

Besides Namibia, Brazil has already signed cooperative agreements in the field of defense with other countries in Africa, such as: Cape Verde, South Africa, Guinea Bissau, Mozambique, Nigeria, Senegal, Angola and Equatorial Guinea. 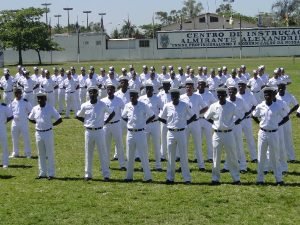 1987 — Visit of Sam Nujoma to Brazil as the leader of SWAPO, when he was received by President José Sarney

1990 — Creation of the Brazilian Embassy in Windhoek

1994 — The signing of the Naval Cooperative Agreement

1995 — The signature of the Basic Technical Cooperative Agreement

2001 — Renewal of the Naval Cooperative Agreement

2003 — The opening of the Embassy of Namibia in Brazil

The strategic strength of a military alliance