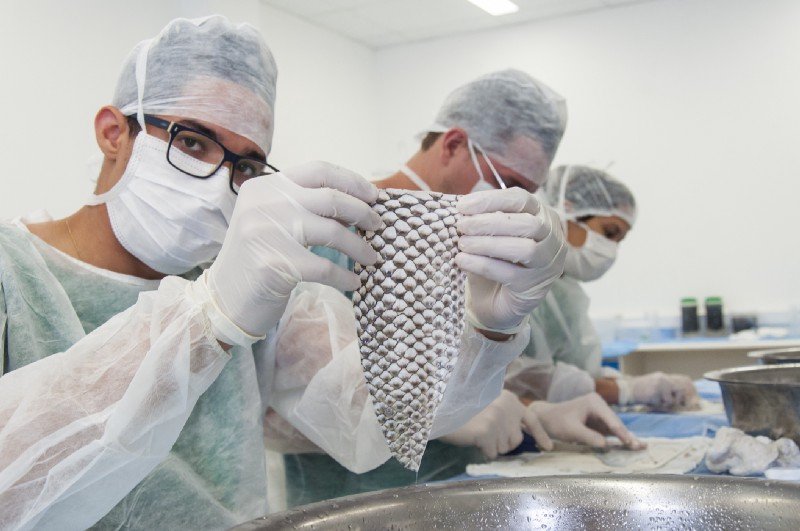 Brazilian researchers have been studying the medicinal use of tilapia skin since 2014. This fish is originally from northern Africa and recently, it has been bet on in the field of medicine for its healing wound properties as being efficient and cost saving. It is the first aquatic animal skin being studied for treating burns; as it is possible for the biological tilapia dressing to reduce this global public health problem that causes a total of about 180,000 deaths per year, based on statistics from the World Health Organization. The majority of these burn cases occur in low and medium-income countries, as almost 2/3 of these cases take place in Africa and Southeast Asia.

Currently, this treatment has been registered for an international patent for treating burn wounds at the “Instituto José Frota” (José Frota Institute) (IJF), in Fortaleza. 120 adults and 30 children have already been benefited up to now. In 2018, the technique is expanding to hospital patients in the cities of Goiânia, Recife, Bauru, and Curitiba. Besides that, it will be tested on other types of injuries in the next few months. “Burn treatment only represents 7% of the technique’s potential uses”. We need to show how it works on different types of sores, such as pressure ulcers, varicose vein ulcers, and diabetic sores”, said Odorico Moraes, who is the coordinator of the Ceará Federal University Medicine Research and Development Center (UFC) and one of the head researchers for this study. “We have already shown how it achieves good results in burn patients. Now, we need to continue in performing other bureaucratic processes as to offer this to a broader public and also to perform other tests”.

The skin analysis performed in the first phase of the study, among laboratory tests and tests on animals, revealed that tilapia contains a large amount of collagen type 1 — two time greater than in human skin — and it also accelerates the healing process. Besides that, this skin has shown a high degree of resistance to rupture and moisture, ideal characteristics for wound dressings. “Tilapia skin helps in the healing process by covering the wound. It avoids loss of liquids, decreases the number of dressing changes, and consequently, decreases the patient’s pain and suffering”, confirms Edmar Maciel, plastic surgeon, who is the president of the “Instituto de Apoio ao Queimado” (Burn Support Institute) (IAQ) and coordinator of the clinical phase of the research study.

Another advantage is it is from aquatic animal skin that has displayed a decreased degree of risk of disease transmission compared to other types of animal skins. “Researchers around the world have sought temporary biosynthetic dressings, such as pig and frog skins, but there is a greater risk of infections and cost constrains in order to make progress using these techniques”, explains Cybele Leontsinis, who is the nursing coordinator at the “Centro de Tratamento de Queimados” (Burn Treatment Center at the Dr. José Frota Institute (IJF). “There are other types of synthetic coverings, such as polyurethane foams that dose medications. They help a great deal in repairing the skin, however they are quite costly”.

The next step is to assure uninterrupted supply of the raw material for supplying the skin bank created at the end of the first phase of the research study. Tilapia skin processing is done manually by our own researchers and in the future, it will be industrialized. And so for this reason, we are closing a contract with a fish processing industry that will deliver the animal skin ready for use at burn centers.

However, the main challenge is to modify the current procedures in the medical community. “We hope to break that paradigm of applying ointment and the need for changing the dressing daily. Silver Sulfadiazine is the standard burn treatment nowadays in Brazil and it has been on the market for over 60 years. And since then, there has been no innovations in burn treatment in Brazil”, Odorico Moraes, extols.

“Up to now, we have not observed any contraindications from tilapia skin. And we are now studying how to make adjustments to the skin, methods for placement, improved treatment for making the patient more comfortable”, stresses Edmar Maciel. The research study on this technique developed in Brazil has been introduced in 32 countries and published in 11 different languages in the most important international scientific journals. “The dream of just one person is a dream. The dreams of many people are the beginning of a new reality”, reveals Dr. Marcelo Borges, who is one of the idealizers in this research work.

Based on this study performed in Brazil, researchers from several parts of the world are trying to use tilapia skin in other fields of medicine, such as gynecology, endoscopy, urology, dentistry, otorhinolaryngology, and even veterinarian medicine. In the United States, for example, Jamie Peyton, a medical veterinarian, who is a researcher at the University of California (UC Davis), used tilapia skin to treat a mountain lion cub that had suffered burnt paws after escaping from a forest fire. That was the first time fish skin was used for treating animal wounds. “It is a perfect idea to use on wild animals” she said. “Fish skin accelerates the healing process and another benefit is it is completely harmless if it is eaten by the cub”.

Tilapias are removed from the Castanhão dam, in Jaguaribara. It is the largest fresh water reservoir in Ceará State, located 260 kilometers from Fortaleza. “The skins are washed in running water from that place where the fish are removed by their own work team, then they are placed in isothermal boxes and taken to the Skin Bank at the Federal University of Ceará”, Edmar Maciel explains. Then fish skins go through an initial sterilization process and after that, they are sent to the “Instituto de Pesquisas Energéticas e Nucleares” (Energetic and Nuclear Research Institute) (Ipen) at the University of São Paulo (USP), where they go through a radio-sterilization process, in order to eliminate any possible viruses and guarantee the safety of the product. “It is shipped under special conditions and at a specific temperature in compliance with strict sanitary criteria”, Cybele Leontsinis emphasizes, from the Dr. José Frota Institute (IJF). Then when the skins return to the research skin bank, after about 20 days, the skins are refrigerated, and they can be stored and used for a two-year time limit. 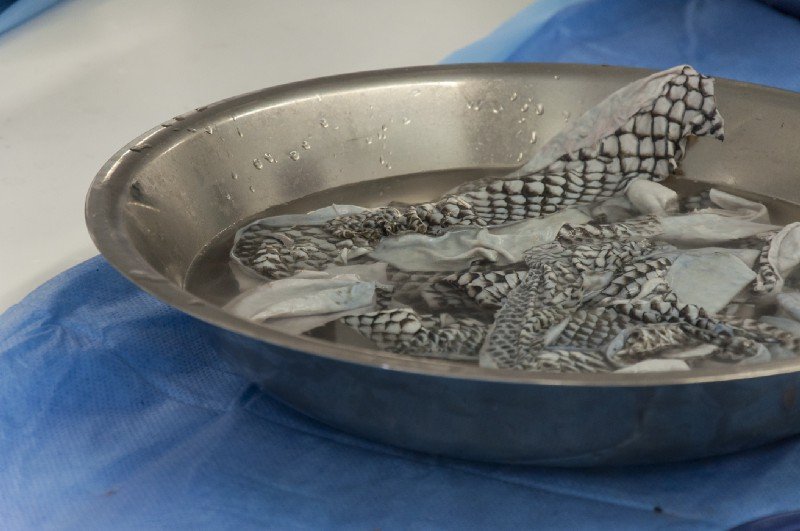 Nile Tilapia (Sarotherodon niloticus), is used for treating burn wounds and it is an African fish from the Cichlidae family. It has been known by the ancient Egyptians since 2000 BC. It feeds on plankton but it also feeds on artificial fish feed. This species first came to Brazil in 1971 for raising in captivity in Ceará State and this fish rapidly spread to other states and neighboring countries. Nowadays, Brazil is one of the ten biggest tilapia producers on the planet, in the ranking led by China. This fish makes up 90% of all fish raised in Brazil annually. 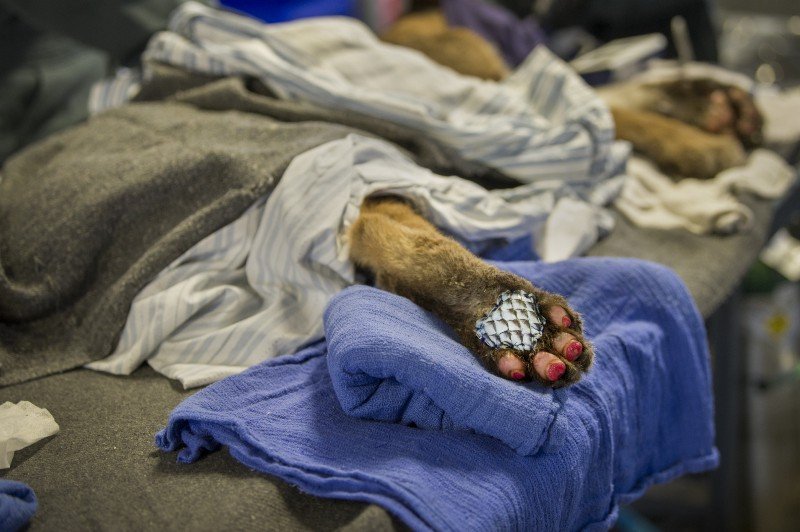 The idea for this research arose in 2011 when Marcelo Borges, a plastic surgeon, read an article about the use of tilapia skin for manufacturing women’s purses and shoes. That same article said that 1% of tilapia skins were used in handcrafted product while the 99% was thrown in the trash. From then on, Borges, who had been working for over three decades on burn wounds, decided to do research on animal skin for treating burn wounds. “At that time, I went to the skin bank in Recife and I learned how to safely sterilize human skin. My learning how to do that served as a basis for creating the protocol for sterilizing tilapia skin. I tried to make that research project feasible in Pernambuco, but I was not successful”, he remembers. The research just began in 2014, when I found everything I needed in Fortaleza: the Ceará Federal University infrastructure and its research staff, as well as the partnership with the “Instituto de Apoio ao Queimado” (Burn Support Institute) (IAQ) and the Dr. José Frota Institute (IJF), a highly complex hospital caring for burn wound patients.

The initial cost of research was 1 million Reais, a very small amount for a research study that would have such a great repercussion on the academic community. “These costs were reduced as the Ceará Federal University provided the entire infrastructure for the research. But in normal conditions, we would have spent around 15 million Reais”, Odorico Moraes believes. The Enel Company funded the first step, an electric energy concessionary. The next step would cost 2 million Reais and will get sponsorship from a local private university.

The mortality rate is decreasing in wealthier countries compared to poorer countries where the rate is 7 times greater. Around one million people suffer from burn wounds in Brazil every year that are normally caused by occupational accidents and domestic violence. However, there are only 46 specialized burn treatment centers and only three skin banks that serve only 1% of the current needs.

DRC: WHO tries to curb Ebola advance in critical areas

Regina Tchelly and her Organic Slum

WHO contributes to disease immunization and surveillance in Nigerian communities