Tourism in a rhythm of adventure

Like the slogan “a wow at every moment” (the “wow in every moment”), the South African government has begun a campaign to attract new tourists. The onomatopoeia “wow” was not thought by chance. The idea is to draw attention to extreme sports. “Adventure tourism is the main attraction for those who want to go to South Africa. There are more than 700 sports in the country,” says Diogo Caldeiras, the Brazilian branch of South African Tourism (SAT), the office responsible for publicizing the destination.

South Africa leads the African tourism market, a $ 44 billion industry annually, according to a report on the continent’s tourism potential published in 2015 by the African Development Bank (ADB), the University of New York and Africa Travel Association (ATA) Despite political instability and lack of infrastructure development, such as intermittent supply of electricity that makes the stay uncomfortable for tourists, the whole African continent has the potential to develop adventure tourism.

The price of adventure

“It is so simple to calculate this: the less infrastructure there is at any destination, the more expensive the adventure is. But believe me, there is market for unique experiences”, says the Brazilian photographer Haroldo Castro, who organizes photographic safaris with people who are interested in inhospitable places on the African continent. Groups are formed between five to ten adventurers willing to pay between 4 to 100 thousand dollars depending on the type of trip, which can last up to two weeks. “The cost of hotels with safety and quality ends up being expensive,” explains Haroldo. But he ensures that infrastructure in general has been improving. “Every year you have new hotels. People are being trained more and more. I would say that it is having a growth of quantity and quality. This is happening as countries develop”.

Another important factor in reducing the final cost of logistics. Countries with more airlines naturally have more economical package tour options. South Africa, for example, received 40,000 Brazilians in 2016, 40% more than in 2015. “With the launch of the Latam flight to Johannesburg, demand for the country has grown tremendously. First, because the Brazilians identify with the company, and then because the tickets became very cheap. The destination has a very attractive cost, what was missing was a way to get to it at cheaper rates, “says Tatiana Isler, from SAT.

Adventures that are priceless

Beyond the infrastructures offered by the various African countries, some adventurers resolve to set as targets to meet some of the radical challenges existing in Africa. The reasons are the most varied: breaking records, overcoming opponents or a simple personal achievement. This is the case of the Brazilian mountaineer Rosier Alexandre, who started climbing ice mountains in 2004 and a few months ago he finalized a personal project called Sete Cumes, which consisted in climbing the largest mountain on each continent.

While traveling through Tanzania in 2011, when he climbed Mount Kilimanjaro, Rosier was surprised by the country’s structure to receive tourists. “In addition to the tourist attractions, the hotels are quite comfortable. It was quite common to find bilingual guides and some who spoke up to three languages, giving information with enough quality”, he recalls.

Each visit to the African continent is a unique experience for the kite surfer Carla Lima. “Without a shadow of a doubt, it is my favorite continent. I transform myself as a human being and I come back much better to Brazil”, she comments . “Africa always surprises me by the purity of the children, the receptivity of the local people, the crystalline and completely untouched waters.”

In 2016, Carla was challenged to travel between Mozambique and Tanzania, along with colleagues André Penna and Cedric Schmidtz of kitesurfing, in a course of 1,000 kilometers at sea. The adventure was recorded on the television program “Downwind in Africa”, screened on Globosat’s closed channel Off, dedicated to extreme sports. “I had already gone to Morocco, Ghana, Sao Tome and Principe and Angola, but this time I went in search of the unknown in all atmospheres. I was like a character, having to expose everything that was happening to me”, reports.

Although she does not consider herself an adventurer, Paula Pereira usually travels on camelback through the desert and the imperial cities in Morocco. According to her, the country has a great structure for tourists. “They have a Tourist Police very active and attentive to any problem related to security,” she says. “In general, Morocco is quite safe in every respect”.

Adventure tourism attracts high-value customers, supports local economies and encourages sustainable practices. It’s a niche segment, but it’s gaining popularity all over the world. The presence of all forms of natural resources makes Africa a holistic destination for all forms of tourism, especially for adventure tourism. According to the World Tourism Organization (WTO), Africa is the second fastest growing tourist destination alongside Southeast Asia.

Data from the African Development Bank (AfDB) point out that Egypt, Morocco and Côte d’Ivoire are the countries with the highest influx of international tourists to adventure tourism on the continent. Lesotho, Chad, Mali, Sudan and Madagascar are the fastest growing destinations for adventure tourism in Africa. “Tourism has shown extraordinary strength and resilience in recent years, despite many challenges, particularly those related to security,” says Jordanian Taleb Rifai, Secretary-General of the World Tourism Organization (UNTWO). “To grow strongly and contribute to the creation of jobs and well-being for communities around the world”. According to the organization, Africa as a whole showed a strong recovery after two weak years, plagued by the Ebola pandemic and localized terrorist attacks The continent received 58 million tourists, a remarkable growth of 8% from 2015, ahead of other regions.

Near the border of Tanzania with Kenya, Mount Kilimanjaro is the highest point on the African continent, with a height of 5,895m at Uhuru Peak.

The African continent has attractions that go beyond nature, according to the adventurous travelers heard by ATLANTICO. “We have contact with different peoples and ethnic groups. And that’s fascinating”, recalls Harold Castro. Mountaineer Rosier Alexandre highlights the joy and hospitality of the African people. “It’s a rich, happy, vibrant people. I think of all the trips this was the most remarkable experience because it was way beyond the mountain climb”.

What to do in each country 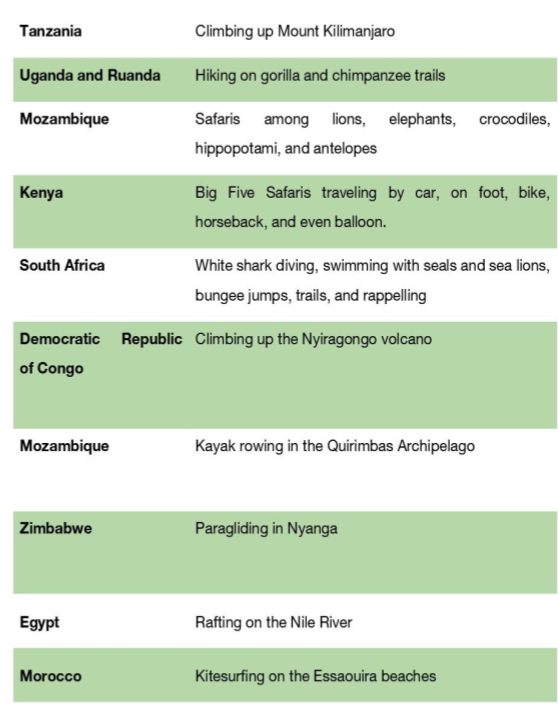 A break for the Ethiopian coffee

Africa has second-largest tourism growth in the world