The 26th United Nations Climate Change Conference (COP 26) is being held in Glasgow, Scotland , that brings together leaders from hundreds of nations around the world in search of an agreement to reduce carbon emissions on the planet and, consequently, curb the anthropic factors of global warming.

While the goal is to reach zero carbon emissions by 2050, encouraging sustainable practices,such as the creation and distribution of clean and renewable energy, actions to achieve this goal need to be revised in order to contemplate each nation, realizing its difficulties and potentialities. Then an important question arises: How will COP 26 bring solutions to the global south?

The Global South has economic particularities and social divides, often neglected. These socioeconomic problems make climate change, for these countries, more challenging. Unlike developed countries, developing countries lack, in many cases the resources, capital and infrastructure needed to ensure its development in a sustainable way.

Therefore, it is necessary that there be a fairer distribution of environmental responsibilities, so that each nation contributes to a more sustainable world within its economic capabilities. Tackling global warming is everyone‘s task, but the burden of this responsibility must be distributed proportionally, so that there is no risk of us “kicking the ladder“

Historically, carbon dioxide emissions coincide with the industrial era, having intensified since the 1950s. According to a recent study surveyed by the University of Berkeley in California, the total in the atmosphere contributed to the emission of 80%, while the countries with the lowest relative development accumulated a maximum of 3%. According to a 2019 survey by independent research provider Rhodium Group, China has so far contributed 27 percent of total global emissions, surpassing the United States with 11 percent of the global total. 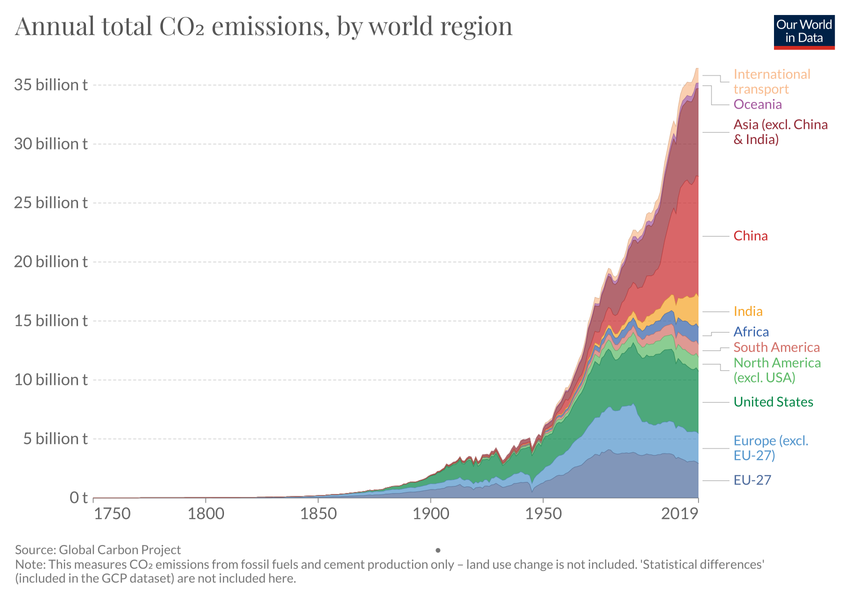 According to data from the World Bank, the energy consumption of developed countries, and even developing countries with well-structured energy matrices, is up to 50 times greater than that of countries with less relative development. Norway, for example, consumed as much as 23,000 kwh of energy per capita in 2014. Bahrain, an oil-exporting country, consumed 19,597 kWh of energy per capita during the same period. In contrast, energy consumption in nations such as South Sudan and Niger is barely 60 kWh per capita.

The World Bank data reiterate the global disparity, with a real abyss between the global north, the developed countries, which are the biggest emitters, and the southern countries, of less relative development, some in a clear situation of energy scarcity. More than that, while developed countries support homogeneous solutions, developing and less developed countries require complex responses that deal with national, local, and community idiosyncrasies: every year, 55 million people are affected by severe droughts, 80% of them being rural producers from lower and middle-income countries.

In this sense, the focus should be on achieving climate justice. The term “climate justice” emerged around the year 2000 and consists of addressing climate change from a humanistic and ethical perspective. Extrapolated to international dynamics, the concept presupposes the confrontation of climate change taking into account the historical responsibility for global warming, identifying its agents and the most vulnerable biomes and populations.

The first move in this direction occurred in 1992, when it hosted the first United Nations Conference on Environment and Development in Rio de Janeiro. This meeting opened doors for the construction of a dialogue on a sustainable development model and generated important results for the scientific and environmental milieu and for an international policy to confront global warming.

In a new conjuncture, already facing the BRICS, and accumulating major advances at the domestic level – from the ABC Plan to PPCdAM – Brazil’s commitment to the sustainable development agenda was renewed in 2012 through Rio + 20, when the country hosted a new summit. The meeting gave the environmental agenda a new impetus, consolidated in the Paris Agreement three years later.

National diplomacy finds backing in domestic commitment, and the energy issue proves elucidative. Brazil has a 47% renewable energy matrix, a mark three times the global average, and well above the mark achieved by the Americans (9%), Europeans (36%), Chinese (13%) and Indians (8%). This adds up to an unparalleled electric matrix, which exceeds 80% with renewable origin, mainly of hydroelectric origin.

The data is a reflection of Brazil’s action to curb global warming. But Brazil’s pro-sustainability initiatives do not stop there. Brazil also stands out in the production of ethanol, being the second largest world producer of this biofuel. In 2006, observing this energy potential, the Brazilian government engaged in what became known as the “Ethanol Diplomacy”. One of its ramifications was the Platform for Biofuture, a coalition of 20 countries that have shown interest in clean energy and bioeconomy agendas.

The current status cannot, however, give way to an immobilizing conformism: to effectively contribute to global decarbonization, an energy matrix of at least 60% renewable should be projected by 2030.

A Green Future for Africa

Regardless the difficulties imposed by climate change, Africa shows potential for embracing renewable energy, with government and private projects scattered throughout its sub-regions.

Kenya, for example, with high potential for wind power generation, has invested in the largest wind farm in Africa, with 300 turbines operating on the shores of Lake Turkana, generating up to 310 megawatts of electricity. The project also received financial support from the European Union (EU) and the European Investment Bank (EIB). In Morocco, the desert region of Ouarzazate has given way to the world’s largest concentrated solar power station.

The African continent has also shown its commitment to the multilateral system, responding to global warming through actions developed with the United Nations and Sustainable Energy for All (SEAforAll). Through these partnerships, the African continent has become an autonomous research and development pole, with scientific and technological discoveries that help combat energy poverty in the region, from agro-industrial production to urban mobility.

The twenty-sixth United Nations Climate Change Conference has been accompanied by mixed opinions.

At the start of COP 26, UK Prime Minister Boris Johnson gave the keynote speech, stating that the climate crisis is a “ticking time bomb.” Also using his speaking time to issue a warning was UN Secretary-General António Guterres, who stressed the importance of “stopping treating nature as a toilet. COP 26 is being seen as a new chance for the governments of the countries that emit the most greenhouse gases to reassess their positions, considering what needs to be changed in order to achieve the goal of cutting gas emissions by 50% by 2030.

Civil society organizations also have a presence at the conference. Plataforma Cipó, a Brazilian think tank that deals with international issues, including climate change, launched its report “Enhancing civil society participation in international climate decision-making: Perspectives from the Global South,” emphasizing the role of civil society in this agenda. In addition, entities such as the Inter-American Association for the Defense of the Environment (AIDA), the Xingu Forever Alive Movement, and Amazon Watch brought data on the Amazon region and forest deforestation to COP 26, pressing governments and businesses for more action.

In contrast, COP 26 has also been a time to embrace achievements. On November 6, a guidebook on how to “refresh” cities was released. Entitled “Beating the Heat: a Sustainable Cooling Handbook for Cities,” the guide dissects how cities heat up quickly due to the “heat island” effect, bringing suggestions for creating green and blue areas, as well as adopting other measures that collaborate for a less hot and more sustainable urban environment.

Another achievement was the signing, by more than 300 entities linked to the sector, of a term of commitment through the Glasgow Declaration for Climate Action in Tourism, in which they commit to cut greenhouse gas emissions in half by 2030.

Brazil again had a low-key participation. President Jair Bolsonaro did not attend the event, as did Xi Jinping, Vladimir Putin and Narendra Modi. The vacuum left by the Union was filled by the Governors, who, under the coalition “Governors for Climate”, launched the Green Brazil Consortium. The Legislative Branch was also represented, with the presentation of a report by the Environment Commission (CMA) on the dismantling of the environmental area, and with the participation of Senator Kátia Abreu, President of the Foreign Relations Commission of the Federal Senate (CRE).

Africa, in contrast, has received the spotlight. The African Development Bank and the Global Center for Adaptation have launched the Africa Adaptation Acceleration Program (AAAP), an action that seeks to mobilize $25 billion by 2030 in building sustainable infrastructure, creating new jobs, and reducing energy poverty and food insecurity. ADB President Akinwumi Adesina characterized the AAAP as “the largest, most ambitious and most transformative climate adaptation program ever created in Africa.

COP 26 has not yet come to an end and until then other alternatives and resolutions in favor of a balance between environment and development may emerge. As in previous conferences, and as in those to come, discourse will only have value if it is followed by action.