Brazil has already been the largest grower of cashew in the world. Nowadays, it is behind India and Vietnam. Vietnam is now the largest current grower and processer and it started growing cashews about thirty years ago. Nowadays, India is the country that holds second place in the ranking, yet it exports only about 20% of its crop. The majority of crop grown does not even leave the country. There are 31 African countries investing in cashew growing, led by Ivory Coast, which holds third place in this list. This sector accounts for 15% of the GDP in some of these countries. FAOSTAT Emissions database is an online statistical data platform from the FAO — Food and Agriculture Organization of the United Nations and reports that the cashewcrop on the African continent has reached 1.3 million tons per year, about 3 million tons of the world supply of cashew.

However, that amount can increase even more. And Brazil plays a fundamental role for that growth. Africa leverages an advantage compared to Asiatic countries in the international market of cashew growing, not only because of its closer geographical location to North America and Europe, but also due to the fact that its growers valorize organic growing. This results in higher quality of the products. Brazil is the holder of the most advanced knowhow for growing and processing cashews: as there is a great concentration of industries and almost all of them are automated. They have a good reputation on the international market, as they are also are equipped with the most advanced scientific, and development research centers for cashew crops in the world, and this center is named EMBRAPA.

Besides that, Brazilian industry provides an extremely high rate for harnessing peduncle (stalks), something that is practically nonexistent in other countries “Brazil is perhaps the only country prepared with the technology for peduncle processing on an industrial scale and with high yields. In other countries, only the nut is harnessed. In the past few years, we have done a great deal of work on valorization the peduncle, for producing juice as well as in other types of foodstuffs, such as food fibers, explains Flávio Paiva, a researcher for EMBRAPA and who has been involved in experiments focused on improving cashews. Harnessing the peduncle — can increase income for small growers and it can also reduce hunger in poorer countries — and this is just one of the factors that can help to impel this sector in Africa and in other countries as well. A partnership between the Japan International Cooperation Agency (JICA) and the Brazilian Cooperation Agency (ABC) resulted in the creation of the International Course on Cashew Growing, Post-harvest, and Industrial Processing.

This course was promoted by EMBRAPA, the participants in the course are technicians, who are recommended by governments in Africa, Latin America, and the Caribbean, as well as East Timor for training to lead innovative cashew growing projects. The training program has been taking place annually for five years and in 2015, and in the latest group — there was a total of 98 technicians prepared. “Some countries have managed to make great progress in improving their crop and participated in cooperative projects, such as Mozambique, Guinea-Bissau, Colombia, and Honduras. These countries have already implemented projects and then they are already seeking to prepare another segment of training for other people in order to transfer technology, commemorates the researcher Flávio Paiva, who also coordinates the course. “Africa, in general, has a great deal of infrastructure problems. Thus, we work very patiently to achieve results. There is very little industrialization. There is so much unfamiliarity regarding opportunities for processing. Almost the entire crop is exported to industries in India, Vietnam, and Brazil. For every 100 kg of cashew 90 is for pulp. And all this is wasted, as they do not know how to process this. We are working and seeking enhancements and approaching this to see what can be done in Brazil, he confirms. 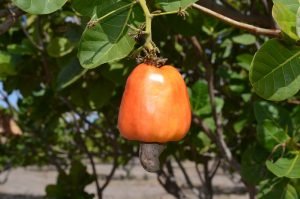 ONCE AGAIN WE ARE THE LEADER

On one hand, Brazil is striving to transfer technology, and on the other, local growers are working fast to recover their leading role, they had held in the market. However, the Brazilian enterpriser faces the high price of nuts and also labor costs, as well as other economic factors increasing the manufacturing process, such as interest rates and high taxes.

Ceará State is located in northeastern Brazil and it leads in cashew growing and exportation in Brazil, as it produces over 50% of the crop in the country and over 90% of the nut and juice processing. The local production is 250 thousand tons per year and it utilizes 400 of the 700 hectares assigned to harvesting the fruit in the Brazilian territory, as it not only suffers from low productivity, but also bad weather conditions, such as drought, which has chastised the cashew farms in the last five years. Thus, to revert this situation, the government, enterprisers, and research institute have joined together in the Cashew Sectorial Chamber. “We seek to provide the means for these players who in some way so they can collaborate or actuate in the productive chain. It is also a concerted effort between the public and private sectors as representative entities participate from these two sectors”, explains Alderito Oliveira, president of Criada in 2009, the Chamber drafted a document, named the Ceará Cashew Productive Chain Development Plan for the years 2014 and 2025, and it introduced various projects seeking to revitalize the section. Piauí, the neighboring state is second on the list of main growers that also has a similar Cashew Chamber. And in Brasília, there is a representative from the sector who holds a seat in the National Horticulture Chamber.

As the current Brazilian crop is not able to supply the production capacity for large-scale industries, then there is no other alternative for the enterprisers to purchase nuts from Africa. “The labor costs are lower and also the volume is greater. The entire harvest from the African continent is four or five time greater that the Brazilian harvest”, explains Alderito Oliveira. “Africa has a really large crop volume and also purchasing is facilitated. Here in Brazil, we have large volume of installed capacity for factory crop processing”.

Africa has an extremely large volume of the crop and provides facilities for purchasing. Here in Brazil, we have a large installed capacity for industrialized processing”. Currently, Benin, Guinea Bissau, Ghana, Nigeria, and Ivory Coast are authorized to export cashew nuts to Brazil.

LOOKING AT THE FUTURE

In September 2015 for four days, the city of Maputo hosted the ninth edition of the African Cashew Alliance Annual Meeting. One of the main challenges for the 200 members of the alliance — made up by representatives from countries, companies, and African Cashew Company — this guarantees that almost the entire crop will be processed from the continent. “Although the small rural African growers guarantee the largest part of the crop, they continue being poor and the companies or the companies interested in entering this sector complain about the difficulties in getting access to credit”, confirms Georgete Taraf, the president of the African Cashew Company. The cashew sector employs 10 million Africans, as this is their main source of income for about 1.4 million families on the continent.

The cashew plant is a perennial plant and native to Brazil and it provides diverse possible uses. The kernel is extracted from the cashew nut, used for food for human beings. The peduncle is also known as a pseudo fruit, as it can be consumed naturally or used or manufacturing sweets, pulp for juice and other industrial food products. A liquid is obtained from the shell of the nut (LCC), used for applications in the chemical industry for manufacturing paints, varnishes, lubricants, and cosmetics.

Ceará State is the largest Brazilian grower, ranging from 48 to 54% of the total crop in the country. The States of Piauí and Rio Grande do Norte grow from 24% to 20%, respectively. The remainder is grown by the States of Maranhão and Bahia the other states grow less than 2% of the total crop.

THE POWER IN THE IVORY COAST

2014/2015 seasons, the second highest yield in this period and just behind India.

Fintechs on the rise in Africa

Earth Observation as a potential for Africa