How to deal with a sister who murders her ex-boyfriends? The answer is in “My sister, the serial killer”, a book that arrives this week to Brazilian bookstores.

Written by the Nigerian Oyinkan Braithwaite, the work has called the attention of literary critics worldwide on account of the elements of suspense, mystery and acid humor of the text.

In the work, Korede, a nurse focused on the career, needs to live and cover up the mistakes of the younger sister, Ayoola, who is the favorite of the parents, quite popular among men and famous in social networks, but has serious psychological disturbances. 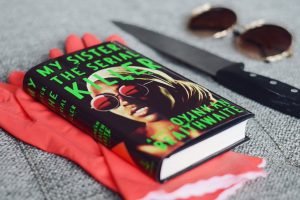 The success of the book drew the attention of the British studio Working Title, the same as “Billy Elliot” and the “Diary of Bridget Jones”, which has already secured the rights to a cinematic adaptation.

The public seems to have enjoyed the story. At least it reveals the number of positive reviews on sites with Amazon and the social network for Goodreads readers, in addition to the countless videos on Youtube commenting on the work.

At Age 31, Braithwaite is Nigeria’s most promising writer. Born in Lagos, where she currently lives, she spent her childhood and adolescence between her homeland and the United Kingdom. He then studied Law and creative writing at Surrey University and Kingston University. He returned to Lagos in 2012.

In 2014, it was nominated among the top ten artists spoken word (declamation) in the poetry contest “Eko Poetry Slam” in Lagos, Nigeria. In 2016, he was a finalist in the Commonwealth Short Story Prize, which awards the best-unpublished texts of the year.

Released in November 2o18 as the author’s debut book, “My sister, the serial killer” was immediately chosen by Amazon as one of the best releases of that month. Before Brazil, it was published in the Uk, the United States, the Czech Republic, France, South Korea, and the Netherlands.

The Brazilian version is being launched by the Kapulana publishing House, which seeks to diversify the Brazilian editorial market with undisclosed authors in the country, some of them from African countries such as Angola, Mozambique, Nigeria, Kenya, and Zimbabwe.

Eliana Alves Cruz and the story of all of us