Seminar Brazil and North of Africa: opportunities for agribusiness and food security In carrying out its role, the Brazilian-African Institute has prepared once again a meeting for the African representatives and Brazilian businessmen to discuss strategies and economic partnerships related to the alimentary sector. The Brazilian-African Seminary on agribusiness and alimentary safety was held from February 23rd to the 24th, in São Paulo, it confirmed the need for Brazil approaching the African continent based on mutual agendas and opportunities. The president of the Institute, Professor João Bosco Monte, stresses the necessity to confirm in the seminary, to discuss “the favorable conditions for diverse countries on the African continent for Brazilian businessmen and for the Brazilian government, which generally has an unrealistic knowledge of the potential to be offered to national companies” as the genesis purpose.

The Minister of Agriculture, Livestock, and Irrigation is representing Sudan, Mudathir Abdulghani A. Hassan, revealed that his participation in the seminary served to benefit his experience on Brazilian companies in the field of research and development for the agricultural, livestock, and machinery sector. “We know the importance of Brazilian products in this sector, we also know how it is important for Africa and the rest of the world to know Brazil and how an event like this can narrow the relationship between Northern Africa and Brazil, as this promotes businesses, foments agribusiness and alimentary safety in the rest of the world”, he emphasized. The head director of “Arranjo Produtivo Local do Álcool” (Local Alcohol Productive Arrangement) (APLA), Flávio Castelar, emphasized the importance of the exchange between Africa and Brazil and stressed the interest APLA has displayed on the northern African region. “Northern Africa is a big importer and exporter of sugar. We are working a great deal in Sudan. I am very interested in visiting these countries, narrowing our relations and see the best ways of collaborating”. “The entire sugar cane harvest has already been mechanized, as this opens up opportunities for machinery. And they are already on the way to a mechanized crop, something that they did not have yet”. The director emphasized, that holding this type of event will break certain commercial barriers between different cultures.

During the course of the seminary, Hadil Fontes da Rocha Vianna, assistant general secretary of the Brazilian Foreign Affair Ministry for Promoting Cooperation, Culture, and Business, emphasized that the promotion of economic relations and cooperation among the countries in Northern Africa is considered highly important to Brazil. Vianna presented business statistics comparing regions and stressed the need for intensifying commercial interchanges.

“Our commerce with the countries in the sub-region of Northern Africa have displayed continual growth, increasing from US$ 7.8 billion in 2010 to US$ 9.1 billion in 2014. Related to agricultural commerce, specifically, it was also noted during the same period, growth of 18.5%. This affected over 70% of the Brazilian exportations to Northern Africa, which are currently composed of agricultural products “. 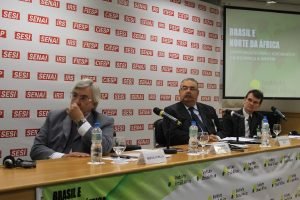 “It is necessary, however, that this commercial relationship become even more diversified, including products with higher value-added ratings and technological basis, an example of this would be agricultural equipment, cars, and other manufactured goods, thus, we would benefit the productive and inventive capacity of Brazilian and African industry, favoring prosperity in our peoples”, he continued.

Larbi Moukharik, ambassador from Morocco in Brasilia, stressed the opportunities in the Country, emphasized that the region “has agricultural vocation”. Agriculture is making an entrepreneur a businessman”, said Larbi and he went on to stress that professionalism in Moroccan agriculture was fomented by the “Plano Verde” (Green Plan), which was created in 2008 for the development of this sector.

Then the ambassador from Mauritania, Abdellahi Nagi, informed that the agriculture in the Country corresponds for 14% of the Gross Domestic Product (GDP) and this sector has been fomented by the government for the past few years. For Paulo Roberto Araujo, who is the head of the BNDES representative office for Africa, he confirmed that “there is an array of challenges” to be faced for funding transactions in Africa. “We expect that the commercial treaties and non-financial cooperation increases”, he said. Araujo discussed alternatives for mechanized funding measures for agriculture in Africa during his lecture.

The seminary also served to encourage already existent commercial practices between the regions, as is in the case of Atlas Olive Oils. According to his representative at the event, Karim Sebti, there is Moroccan agribusiness activity is taking place in Brazil to encourage local business owners to invest in the olive oil crop sector, whereas they grow olive trees, and produce olives, and olive oil. According to him, there are many opportunities for Brazil to invest in Morocco”.

The head director of the agency for promoting investments in Tunisian agriculture is, Abderrahmane Chafii, who revealed his desire for his Country to enter into partnerships with Brazilian businessmen. “This partnership can be focused, let’s say, in the field of agricultural crops as well as in processing and refining”. Chafii stated that his Country has a broad-based experience in administrating the agricultural sector in the realm of alimentary safety and global development.

SDGs: Tang Shengyao, from FAO, talks about the role of South-South Cooperation