Brazil must expand use of tilapia to treat burns

Using Twitter, Brazil’s president, Jair Bolsonaro, stated that he will propose some studies to prove the scientific efficiency of the treatment of burns with tilapia skin. In the tweet, he pointed out that more than one million people a year suffer from burns in Brazil and that “tilapia skin has proved to be excellent in this treatment.” 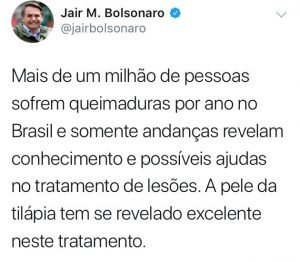 “The recognition by the President encouraged the researchers, who dream of distributing the product through the public health network, benefiting victims of burns free of charge. Currently, national and international companies are already in negotiations, seeking registration in the competent bodies for later commercialization,” celebrates the plastic surgeon Edmar Maciel, president of the Institute for Support to Burns (IAQ, in Portuguese)

“Currently, the project has 168 researchers and collaborators in Brazil and abroad, being in six Brazilian states and three countries (the USA, Colombia, and Germany),” says Edmar Maciel. The current stage of the project covers 38 research projects and won eight awards at scientific congresses.

The idea of using tilapia skin as a dressing appeared in 2011, with a plastic surgeon from the Brazilian state of Pernambuco, Marcelo José Borges de Miranda. In 2014, he was invited to develop the study in the state of Ceará, under the coordination of Dr. Edmar Maciel, at the Nucleus of Research and Development of Medicines, of the Federal University of Ceará, presided by the researcher Odorico Moraes. In February 2015, the NGO “Instituto de Apoio ao Queimado” (Institute for Support to Burns, IAQ), which performs the physical and psychological rehabilitation of burn victims free of charge, entered into an agreement with Enel, an electricity distribution company, to finance the project.

The Preclinical phase (laboratory and animals) was finished in 18 months, in a total of 12 steps. Later, Clinical Stages I, II and III, in burned humans, were developed at the Dr. José Frota Institute Hospital in Fortaleza, which was closed with excellent results. 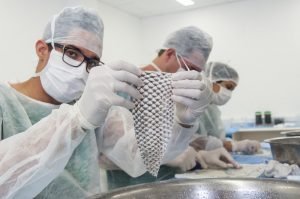 In addition to burns, studies have been carried out on the reconstruction of the vagina in women with vaginal agenesis, and others are being carried out in veterinary, varicose ulcers and dentistry. Researchers have also been able to extract collagen from tilapia skin for cosmetic and nutraceutical uses, and other products are being developed in several areas of medicine, such as cardiac surgery, neurosurgery, endoscopy, otorhinolaryngology, and urology, among others, which still require tests on animals.

The repercussion of Bolsonaro’s decision on Unilab