The South Atlantic region is located between South America and the African continent and it is vitally important for relations and communications between the two continents.

This ocean had already been the mandatory maritime route to the Indian and the Pacific, but it became less important due to the opening of the Suez canal, in 1869, and the Panama canal in 1914, as they oncentrated the flow of Western maritime trade on the Mediterranean Sea and the North Atlantic, relegating the region to a relatively secondary condition in context to global geopolitical relations.

However, this situation may be coming to an end. “A substantial portion of international trade crosses the South Atlantic Ocean. There are strategic ore minerals and regions of territorial dispute. There is also the crossing of toxic cargos and a series of illegal transactions led by organised criminal groups and piracy”, explains Alcides Cunha, Professor of International Relations at the University of Brasília (UNB).

Besides that, there are two aspects requiring increased efforts for the security in the South Atlantic Ocean region: the increase in oil production from the reserves located in the South American and Western African seacoast basins, as well as the potential for extracting found in the pre-salt layer along the Brazilian seacoast. For a comparative purpose, the daily production of oil from the South American sea was 2.5 million barrels in 2005, and it should show a notable increase to 6.1 million by 2030, a growth rate of 144%. In that same period, the African seacoast production could increase from 4.9 million to 12.4 million barrels per day, an increase of 153%.

The Gulf of Guinea: a sensitive region

With the control of 8% of the petroleum resources in the world, as well as fishing activities and significant ocean traffic, the Gulf of Guinea is a strategic region for international geopolitics, from the sustainable development point of view, as well as economic aspects.

“Europe, the United States, and countries in the South Atlantic region along the African coast that have joined in the fighting against piracy, in an attempt to assure normality of the

strategic maritime situation in that region” states Pedro Esteves, who is an analyst for Africa Monitor consultancy. “This also helps to avoid some attempts for constraining the flow of illegal immigration crossing from the western African coastline”.

The United Nations (UN) has encouraged bilateral and multilateral partnerships to improve the antipiracy capacity of the Governments and regional organizations regarding personnel, funding, technology, professional training, and equipment. Thus, there has been a constant decrease in the number of incidents and illegal activities registered throughout the past years, but insecurity remains as a source of concern. These countries, justifiably, have requested more international support in their regional efforts. According to the UN, piracy and these armed attacks are not only limited to the oil sector, as they have diversified to human, drug, weapons, and medication trafficking, as well as illegal fishing. This situation increases the challenges of the countries in that region and forces them to deal with the issue of human rights. The solution is focused on promoting peace and reestablishing regional stability, strengthening Governmental institutions, further develop the economy of the countries, and respect for human rights.

Chiefs of State and Heads of Government participated in a summit meeting in Yaoundé, capital of Cameroun, in 2013, to discuss the problem. The leaders adopted a memorandum of understanding and decided to create an interregional coordination center on this subject. Opened in 2014, the center has not become fully operational,due to staffing,financing and logistics constraints. “Working together and implementing joint and affirmative initiatives are the only way we will be capable of providing better protection for the valuable assets from our seas, our oceans and their resources”, stated the president of Togo, Faure Gnassingbé, during the Lomé Summit. The event organized by the African Union in October/2016 reunited 17 African presidents and the vice-president of Nigeria to discuss the problems.

The GoGIN project was even launched during the event, co-funded by the European Union and Denmark (and they will contribute 7.5 million Euros and 1.8 million Euros respectively), as the objective is to create a network for sharing information among maritime security and regional coordination platforms created in source countries. “The fight against maritime criminality and promoting maritime security is a true challenge that Africa and the European Union must face jointly”, confirms Karmenu Vella,European Commissioner for the Environment, Maritime Affairs and Fisheries. “The cost of piracy in the Gulf of Guinea in 2014 is estimated at around US$ 1 billion. But, in fact, the overall cost of maritime insecurity is much higher, especially related to jobs lost in the European Union, and even more so in Africa”,he concludes.

The South American side

About 1,600 vessels sail daily, including commercial and fishing vessels, and they are commanded by the Brazilian Navy, the largest in South America and Latin America, as well as the second largest in all parts of America, just behind the United States Navy. Brazil also integrates its forces with Uruguay, Paraguay, and Argentina, as the South Atlantic Marine Region (AMAS). “The presence of the AMAS contributes to the strengthening of regional strategies focused on the security of maritime traffic”, explains Rear-Admiral Flávio Augusto Viana Rocha.

The relations between Brazil and several African countries in the area of defense have been intensifying in the last decade, especially in the areas of training of military personnel, “says Christiano Sávio Barros Figueirôa, Chief Advisor of the Peace and Security Division from the Ministry of Foreign Affairs of Brazil. “There are also initiatives to supply defense material, including technology transfer. Brazil has prioritized partnerships with countries on the western coast of Africa, especially in the field of maritime training related to monitoring and exploration of the South Atlantic resources”, he adds.

According to Itamaraty, Brazil has already signed Cooperation Agreements on the Subject of Defense with ten African countries and others are in the process of negotiation. This cooperation is even broader based, involving different types of programs and exchange initiatives, such as, the support offered to develop the Navy of Namibia. This story has already been published in the 5th issue of ATLANTICO magazine. “

“In my view, if this scenario we have today, without enemies and without threats, undergoes any changes, I believe they will come mainly from the South Atlantic. In terms of the representation of its strategic role,it is enough to say that about 95% of our trade goes through the South Atlantic. This evaluation is like the realities of several other members of the Zone”, stated the Defense Minister of Brazil, Raul Jungmann, during a lecture at Rio Branco Institute, on January 25th.

In 1982, Brazilian diplomat José Viegas Filho wrote the dissertation “The Security of the South Atlantic and Relations with Africa”, published as a book in 2016. In the text, he proposes the creation of a South Atlantic Cooperation Treaty. The closest to this was the creation of ZOPACAS in 1986. “A broad-based political dialog is necessary to achieve this and a discussion on a cooperation mechanism of a multilateral nature. Most of these efforts nowadays are related to bilateral or they are extremely segmented. Security in the Atlantic needs greater multilateral accountability”, proposes Alcides Cunha, of UnB.

ZOPACAS unites all the three South American countries and the 21 African countries of the South Atlantic. The last expansion of the Zone occurred at the beginning of the 1990s, when Namibia joined, after getting its independence, and then South Africa, after the end of the Apartheid regime. “In a historical perspective, it is necessary to recognize that the main objective of was achieved. Although, there are countries in the Zone continuing to face challenges related to the subject of security and sustainable development, since the establishment of ZOPACAS the South Atlantic has become consolidated as an environment of strategic stability”, defends Christiano Sávio Barros Figueirôa. “In the 30 years since the establishment of ZOPACAS, there have been no conflicts among the States members of the Zone, nor with regional powers outside of the zone, neither nuclear implementation in the areas of the region by armed nuclear countries. “Consolidating these advances and deepening the cooperation of ZOPACAS are the priorities at the current juncture”, adds the Brazilian government advisor.

“The region has never been a priority, neither during the clash between the USA and the USSR, in the so-called, Cold War. During this period, Brazil’s main role in this bipolarity was to act, if necessary, together with the Americans in the defense of the South Atlantic, which was not a priority area for the great powers.”, states the Coordinator of the Research and Study Group on International Conflicts at São Paulo State University (Unesp), Sérgio Luiz Cruz Aguilar. “Although, volatility in terms of security in the world exists, thereby instability in parts of the world can increase the importance of the role of the South Atlantic as a route”.

A history of tranquility

Despite the climate of insecurity in the Gulf of Guinea, the South Atlantic has remained as the most peaceful among the oceans during the second half of the XX Century. History recorded some isolated surface actions, during the First and Second World Wars, and the Axis submarine campaign in the World War II. The South Atlantic regained some importance in the era of “super tankers” vessels, during the 1970s, due to the first oil crisis and a temporary interruption of vessel traffic through the Suez Canal. Between April and June 1982, it became the scene of an armed conflict between Argentina and the United Kingdom, due to the possession of the Falklands.

Exchange for protection of the Gulf of Guinea

Last March, the Brazilian Navy sent “Apa” an Oceanic Patrol Ship to the region with a military crew of 122. Besides the Brazilians, there were also European, American, and South American crew members. The initiative was led by the United States Navy for train military personnel of the west coast of Africa in marine interdiction actions. The training included the seacoast of Angola, Congo, and the Democratic Republic of Congo. 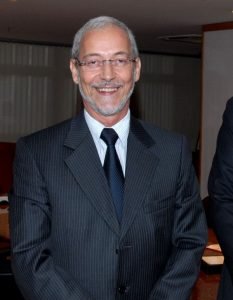 “We are in a situation of potential fragility”

Brazilian diplomat José Viegas Filho studies the security issue in the South Atlantic.He is the author of a text written in the distant year 1982,which is the basis of the book published in 2016 under the title “South Atlantic Security and the Relations with Africa “. At the time,he defended the creation of a treaty of cooperation between South American and African countries as defense strategy of the region.To ATLANTICO,the diplomat,who was once Brazilian Defense Minister discusses what has changed in the last 35 years and talks about the challenges for the future.

ATLANTICO — International geopolitics change and we have new realities,such as the discovery of Pre-salt here in South America …

José Viegas — This is a real need.No country is going to attack Brazil.We do not take that risk.But we have the risks of sabotage and terrorist acts. Although this possibility is reduced,it is real, because we would not be able to defend ourselves.

ATLANTICO — Back then,you defended a policy of integration between Brazilians and Africans. What are the challenges for the future today?

José Viegas — The idea was to create security mechanisms of the countries of our region,so no one would have to say that they were at the mercy of the Soviet Union or the United States.This plan was neither developed by Brazil or the African countries.In other words,we are in a situation of potential fragility.

José Viegas — Without a doubt.Less for purely military reasons and more for security reasons in the broadest sense of the word.The Navy is a force that needs to be shown. “Show the flag”: this is an important thing. Its presency, gives security and Brazil urgently needs to have a force of frigates,which are lighter and faster ships,that can give security to our Blue Amazon.