Afro-Rock: the sound of André Sampaio

Afrobeat is a term used to designate the fusion between Yoruba, jazz, funk, and also other musical beats. It has been popular in Africa since the 1970s and its main creator and key proponent of this style of music has been the Nigerian musician and activist Fela Kuti. He exerted an influence on André Sampaio, Carioca, to invent Afro-rock. “Afrobeat has become a label for all this kind of contemporary musical sonority coming from Africa. I have named my musical style as afro-rock because my electric guitar plays the role of extending that bridge between contemporary sounds and African Diaspora, reveals André.

Afro-rock created by André Sampaio adheres to this style, as a recording artist, after a very successful 12-year career in the Reggae band “Ponto de Equilíbrio” (Balance Point). André is an excellent researcher, so he has always sought to blend ancestry and contemporaneity in creations as a musician. He was only able to play on African soil in 2009, when he first visited Mozambique, sponsored by the Brazilian government. After that, other excursions occurred. The latest one lasted two months in 2017, when he went to Mali, Burkina-Faso, Guinea, and Senegal. “There are a great deal in common between the musical sounds from Brazil and Africa, such as percussion and horns”, he believes. “It became very clear to me how our music is the common meeting ground for these fusions”.

That fusion is present in his two albums. The first one was released in 2013 entitled “Desaguou” (Drained). “He speaks a great deal about his enchantment for Africa. I just fell in love with the places I visited and the people I met”, said André. The second one was released at the end of 2017. It is available for streaming, from such web-based services as Deezer and Spotify, “Alagbe” speaks about resistances. “From then on, everything changed. In this second release, we now have to hold back a wave of increasingly greater setbacks”, he believes. “And I need to help people express themselves openly and also get involved in the struggle. There is a great misunderstanding among many recording artists and intellectuals, who set themselves up as saviors, as if they were better than other people”.

The influence from African music in Brazil is unquestionable, according to André Sampaio. “If before, the Afro blocks were niches of resistance, just like Maracatus themselves, nowadays we face another moment in time. Some recording artists and bands, such as Rappa, Natiruts, Criolo, Emicida, Iza, and many others, have come back to speak about African matrixes and other kinds of musical sounds, that are African and meanwhile contemporary”, he observes. 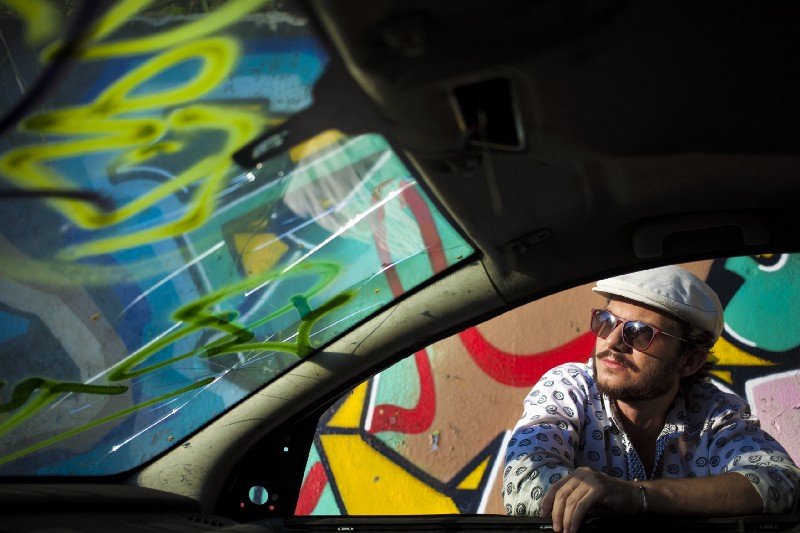 André has signed a contract with Sony Music Entertainment Company and he will release a video-clip very shortly and go on tour around Brazil and internationally. “His idea is to return to Africa and visit places he has yet to go. He is planning to even go to Mali, Mozambique, and Burkina-Faso, but he also wants to go to Benin, Cape Verde, Angola, and South Africa. Besides that, we already have songs recorded for a possible EP (Extended Play) and a project for a series of videos to document these trips”, he adds. “The idea is to promote more encounters among Brazilian and African recording artists. But even better, if we could bring some of these recording artists to Brazil”.

Playlist
André Sampaio grew up in Vila Isabel listening to Samba, and he reveals that nowadays he pays attention to other beats, such as Coco, and “Samba de Roda” (Wheel Samba). In the current musical playlist, there are bands and contemporary African recording artists, such as Fatoumata Diawara, Vieux Farka Touré (André partner in some gigs) and Songhoy Blues, all of them from Mali, as well as Blitz the Ambassador a rapper from Ghana. He really likes the singer Luedji Luna and BaianaSystem group from Brazil.