One year without Marielle 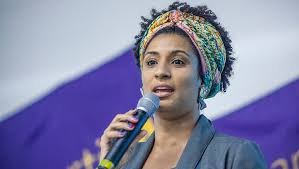 One year after the death of Marielle Franco, who was a Carioca (from Rio de Janeiro) parliamentary member, there are still no definite conclusions regarding the investigations to her murder, even though two suspects were put in jail on March 12th. Marielle, 38, was a defender of human rights. Black and from the favela, she was affiliated to the Socialist and Freedom Party (PSOL) and she was elected as a Rio de Janeiro city councilwoman. She was brutally assassinated beside her driver Anderson Gomes, who was shot in the head. During the period when she was acting as a defender for human rights, Marielle dedicated herself to the fight against violence linked to drug traffic, defended the rights of LGBT, blacks, and all classes susceptible to any situation of vulnerability. For these reasons, even though it has been so long since her death, her memory continues living on in various domains around Brazil and the rest of the world.

Minutes before her assassination, Marielle was present at a meeting at the “Casa das Pretas” (House of the Blacks), in Rio de Janeiro.  “The ‘Casa das Pretas’ is one of the spaces for hosting, debating, political and cultural articulation, and a great reference for black women, especially young blacks. It was due to this reference that Marielle requested us to promote, no one could have imagined, her last work,” explains Edmeire Exaltação, one of the coordinators at the center.

For Edmeire, the relationship between “Casa das Pretas” and Marielle was the same as the house extends to all people who are committed to the political agenda of black women, backing political projects supporting black women and all segments considered as outcasts from society. “Marielle, alive with her combative policy, and now with demonstrations in various parts of the world against her murder, represented, and still represents, strong resistance to growing conservatism throughout the world. In Brazil, more specifically in Rio de Janeiro, Marielle represented sectors that were marginalized and persecuted by lethal practices of a state of exception such as poor youth, LGBTs and the black population as a whole,” she recalls.

Edmeire Exaltação classifies the death of Marielle as a reflex from an intolerant and authoritarian state guaranteeing impunity to its thugs. “The assassination of Marielle was a message to intimidate everyone involved in a project fighting for defending human rights, a political project for equality and respect for marginalized populations. Due to this, it was extremely depressing for everyone who was at the “Casa das Pretas” that day. Even nowadays, we still cannot get over that shock,” she laments.

Until nowadays, there are campaigns and protests throughout Brazil honoring the memory of Marielle, recognizing her as a woman who fought against different types of inequalities and prejudices. Carnival, this year yielded several tributes to the PSOL city councilwoman, ranging from samba schools in Rio de Janeiro and São Paulo to street groups spread around different cities.

Since her death, PSOL has defined a specific date to pay tribute to Marielle on the 14th of each month and especially to demand a solution to her case. “This next 14th, one year after the crime, we will launch a virtual platform called ‘Flourish for Marielle’ (where we will publish hundreds of tributes that have been paid to her from all around the world and so that everyone can know Marielle’s work as a city councilwoman and defender of Human Rights,” assures Juliano Medeiros, National President of PSOL.

For Medeiros, Marielle is the main victim of increasing violence, intolerance, and hatred that have reached Brazil in the past few years. The crime she suffered was even more serious, as she was a parliamentary member, the only leftist black woman in the City Council in the second largest city in the country. “In Rio de Janeiro poor people are at the mercy of many types of violations of Human Rights. And as Marielle knew that scenario very closely, as she originally was from the Maré Favela, she knew that few people could understand the pain of those who suffered from violence,” he declares.

He even tells that Brazil is living a paradox. “There are those who are on one side disseminating hatred and violence and they have achieved a great victory and now they are governing Brazil. Their supporters come and participate in a shameful defamation campaign that brought about this crime and tried, yet unsuccessfully link Marielle to drug trafficking. Therefore, it seems clear to me, Brazil has gotten even worse after the crime that killed our companion. And on the other hand, black women have never before been so active in Brazilian politics. Just PSOL has elected four black women in Rio de Janeiro, a federal representative, and three state representatives, all of them are connected to the mandate or the political work carried out by Marielle,” defends Juliano.

“The crime against Marielle and Anderson was cruel, but it also created a very beautiful feeling of solidarity and recognition, especially among black women. This has been very important to honor her memory”.  (Juliano Medeiros).

Amnesty International, a non-governmental entity defending Human Rights, published a document named Marielle Labyrinth in January, it was prepared based on the information disclosed by public authorities and the press posed a series of questions and answers regarding this crime.

Another campaign being backed by the organization is the Write for Rights, the largest worldwide campaign promoting human rights. The purpose of this initiative is to provide space and a voice for fighting against social injustices, abuses, and prejudices affecting women all over the world. The proposal consists of mobilizing people and writing letters supporting those women who are victims and thus demand an official position from authorities for their defense. This campaign has focused on Marielle Franco as an inspiration, as she was recognized as a defender of human rights in Brazil.

The assassination of the PSOL City Councilwoman won international notoriety.  Various international press organs published the news of her execution last year, such as El País from Spain, The Guardian from England, The New York Times from the USA, La Figaro from France, Público a Portuguese newspaper, and the Frankfurter Allgemeine Zeitung from Germany. In Portugal, The cities of Porto and Lisbon organized three manifestations in tribute to the memory of the PSOL city councilwoman.

The John Hopkins University in the USA launched this January a scholarship named Marielle Franco for the master’s course in Foreign Affairs. The objective of this tribute is to sponsor students who are committed to fighting for social justice, equality, as well as effective political representation. The scholarship is focused on Latin American studies.

A symbol of resistance

Stephanie Ribeiro, a feminist, architect, and a columnist from Marie Claire Brasil describes Marielle as a symbol of all injustices this country has enacted against blacks, women, and impoverished. “Her death was so shocking, the violence and ease to mow down the life of a city councilwoman, furthermore amplified that feeling of fearfulness. All this showed it is necessary to reconsider the type of protective policies in this country, so that parliamentary members are vulnerable due to their identities and speeches, as this does not look like it was ordered by the Government, but also it is not being completely tracked by the parties,” she declares.

Stephanie evaluates the impact from the death of the city councilwoman as an “institutional genocide against the black population”. On the other hand, she believes that the political scenario is favorable regarding the presence of women in politics, even more so, black women. “Brazil is living in chaos, although the voices of blacks and feminists are occupying increasingly strong and confident spaces regarding their role.

Getting close to a solution

The Civil Police as well as the Federal Police in Rio de Janeiro recognize this as a political crime and not as an isolated act against individuals. The president of PSOL and everyone in the party is facing a great deal of indignation due to the absence of a solution to the case, but also understand that the investigators have a lot of information that needs to be preserved as to not interfere in concluding the case. “This is a highly sophisticated crime, carried out by trained and probably linked to special battalions of the Military Police of Rio. But the perpetrators of the attack, who ordered it, and – especially – the reasons”, analyzes Juliano Medeiros.

Two days before completing one year after the Death of Marielle Franco, there are two suspects to the crime, Ronnie Lessa and Élcio Vieira de Queiroz who were put in jail in Rio de Janeiro. Even though the investigation of the crime has made progress, the case still remains without answers, especially regarding the motivations and the perpetrators who murdered Marielle Franco and her driver Anderson Gomes. Amnesty International, declared in a statement that these people must be taken to justice so that a trial and due process are carried out, in order for the determination of eventual criminal responsibility. “Now, more than ever, Amnesty International reiterates the necessity to, as is done in other countries, in hiring an external and independent group of specialists (auditors) to monitor the investigations and due process. The organizations furthermore reiterate that there are still many unanswered questions and the investigations must continue until the perpetrators and those who ordered the assassination are brought to justice”.

Stephanie Ribeiro claims that the death of Marielle Franco involves important and relevant names from the current political conjuncture, and emphasizes the fact that there is political capitalization concerning this death, as it is being used for even leveraging political careers or memories from the presence of some. “Marielle has become a martyr, in one respect, it brings back her constant memory and emphasizes the need for solutions, and on the other hand, it makes some people show their interest in some way to capture that visibility of their own indignation”.

“All her relatives are apprehensive and seeking answers, but it is also necessary to fight to protect her from being used. It is necessary to take on this fight and that memory in what it represents,” she concludes.

Chico Carneiro, Between Amazon and Mozambique, everything becomes a movie