The Brazilian battle against child labor 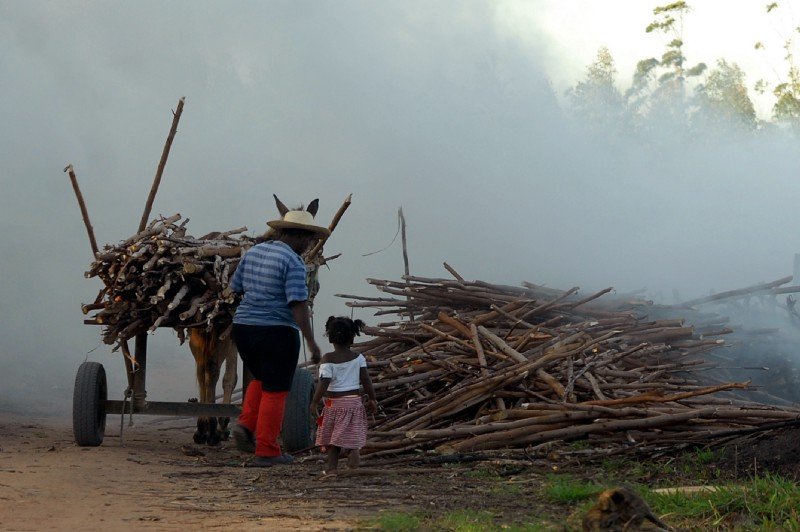 Unicef estimates that around 150 million children from the ages of 5 to 14, or almost one in every six children in that age range are involved in child labor. Brazil has currently around 3 million and 500 thousand children and adolescents in this situation. However, the number was even greater in 1992, when the Country performed it first formal survey on this subject.

At that time, there were a little over 8 million children who were working, which means there was a reduction of 57% in this contingent. “A child who works finds it more difficult to keep up in school, become fully developed, qualify adequately, and play”, argues Maria Cláudia Mello Falcão, the coordinator of the International Program on the Elimination of Child Labor in the World Labour Organization (ILO) in Brazil.

The current statistic represents 8% of Brazilian children. “That can compromise their future, due to the fact that they are not developing, at a proper age, and their full potential”. Although Brazil is still facing serious challenges, our reality in facing this problem has become a global reference and has inspired many people from all over the world.

Brazil has ratified two international conventions, proposed by the International Labour Organization (ILO). The first is number 138 that speaks about setting a minimum age for being prepared for starting to work. And number 182 speaks about the urgency for doing away with the worst forms of child labor. “As these conventions are ratified, the ILO provides support to our country, so that what has been defined in that convention can be implemented”, explains Maria Cláudia.

The International Program on the Elimination of Child Labour (IPEC) has been active in Brazil since 1992, making Brazil one of the pioneer countries in the implementation of IPEC. “The ILO chose Brazil due to it high level statistics, but also because it knows there is a political environment for this and especially because the country admits having the problem”, she tells. According to her, there are still many countries that do not admit to child labor, which makes it even more difficult for the work of ILO. “We promote mobilization campaigns, for the awareness on the bad effects from child labor, we help strengthen institutions that deal with this concept, prepare skills, draft guidelines, and make our entire base of knowledge available, launching a series of studies and research projects to provide support for local administrators to make decisions based on the local reality”, details Maria Cláudia. 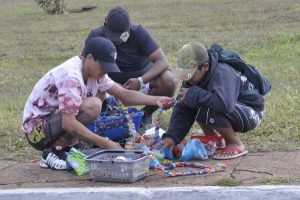 Partnering with other countries

Brazil is recognized internationally for all its intervention policies and the eradication of child labor. It employs some local government policies which are exported to other countries by way of the South-South Cooperative agreements. The ILO promotes some triangulation processes. “When we identify in any given country a specific need, then we share the Brazilian experience”, reveals Maria Cláudia. “We have a partnership arrangement with other Latin American countries, Africa, and Asia. It is a series of cooperative initiatives that were done in Brazil on the subject of child labor”.

In 2014, the ILO launched the Regional Initiative in Latin America and the Caribbean free from Child Labor, whereas Brazil was one of the impellers for that initiative; however, without any hierarchical level among the countries. Maria Cláudia said, “countries try to help each other mutually, especially in a period when we all know that funds for international cooperation are very scarce”.

After signing international conventions and mapping the problematic systematically, Brazil needed to create measures for putting into practice its policies on fighting against child labor. Thus, the National Forum on Preventing and Eradicating Child Labor (FNPETI) was launched in 1994, reuniting representatives from the Brazilian government, NGOs, employer confederations, labor unions, institutions, whether governmental or not, committed to the prevention and eradication of child labor.

“The Forum due to its excellence is a political spokesman. Because, although it is constituted by all these representative entities from distinct segments of Brazilian society, it expresses its own voice, speaks beyond the segments it is composed from”, assures Isa Ferreira, executive secretary of FNPETI. “It play a strong role and imposes its political incidence in the Brazilian legislature, defending legislative proposal for assuring increased rights for children”, Isa adds.

The school as the focal point for this fight

Eighty percent of the children and adolescents who work are also attending school. However, there is evidence that these children and adolescents drop out of school at a greater rate and achieve decreased yield. Based on that premise, the Government Labor Ministry (MPT) carried out a campaign in 2008 called “Education, the right answer for child labor”. “We have seen the need to develop other spokesmen. The educators, those who are in direct contact with these children. They are important for analyzing the signs of child labor as they show up, such as tiredness, signs of accidents or poor scholastic attendance. And they were not participating in this debate”, observed the labor prosecutor Antônio de Oliveira Lima who, based on that campaign, idealized the Educational Program against the Exploitation of Child and Adolescent Labor.

The program begin in Ceará and afterwards was implemented in another 16 States named MPT Na Escola (Government Labor Ministry in the School) and its main merit has been the involvement in more people in the awareness process against child labor. “The teacher states the child listens and then, the parents listen”, he believes. “We have seen that the partnership among educators was fundamental”. Brazil created an inter-sectorial agenda that involves other sections, such as health, welfare, and social work councils for minors.

Since 2014, the Social Development and Labor department and the Social Development Ministry have been focusing their actions on municipalities where there is a higher rate of child labor. Besides that, they are preparing eight regional conferences on this subject. “We have not heard about this kind of initiative in any other country in the world”, defends the prosecutor. 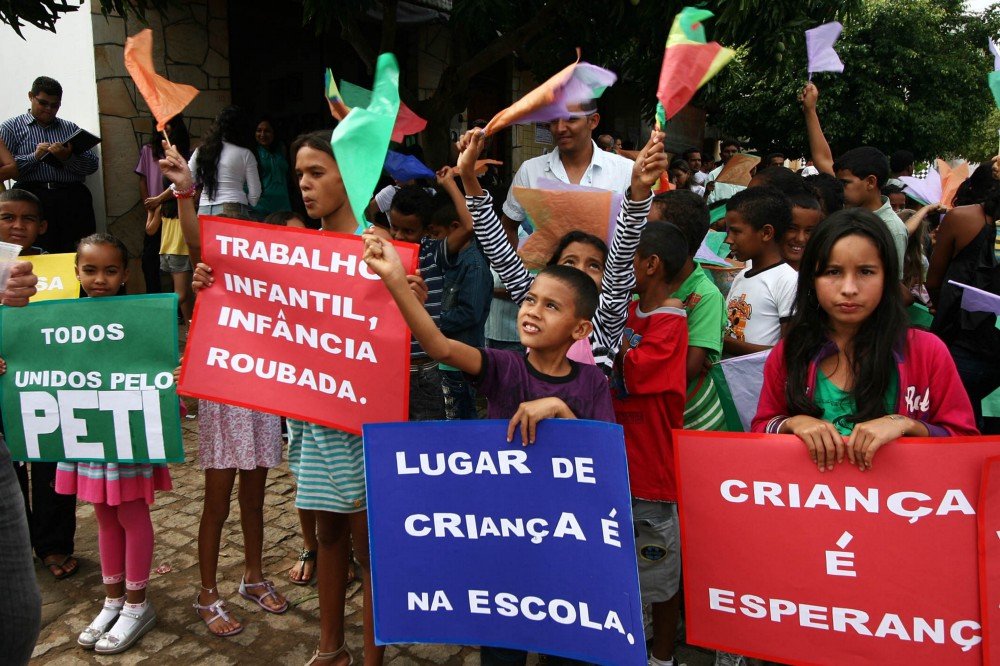 In spite of all this progress in Brazil, it is still necessary to expand its initiatives against the exploitation of child labor. The MPT in the School is still present in only 10% of the municipalities in the country. Another challenge is to restrain child and adolescent labor from participating in informal activities, as they are more difficult to inspect, even more so in urban areas. A third of the current 3 million children and adolescents who are still working live in the countryside and the other two thirds are in cities. And that implies a change of strategies. “It is unacceptable that Brazil still has half a million children working from the ages of 5 to 13”, complains, complains Isa de Oliveira, from FNPETI.

Another issue for improvement is the quality of teaching. The enrollment rate among Brazilian children and adolescents who are working is high: 96.8%. However, that rate does not guarantee learning. Studies coordinated by UNICEF have shown that child labor is a determining cause for dropping out of school and age-grade discrepancy.

The main welfare program in Brazil, named “Bolsa Família” (Family Welfare) reaching 18 million and 500 thousand children, in spite of contributing to improve scholastic attendance, it does not affect reduction in child labor. “The compulsory or conditionality of removing them from child labor is not in the legal context that created the program”. The greatest challenge, however, is not related to the Government but inside their own families. “The involvement of the family is still very little in the eradication of child labor”, reminds Antônio de Oliveira Lima, from the Government Labor Ministry. “Many families are still not aware of this and allow this to continue, due to a needy financial situation, so children attend school and then work in another schedule”.

The results from child labor exploitation are adverse for society. 90% of adolescents who have been put in juvenile correction centers in Brazil have been child workers, and performed badly in school or were not attending school. “There are issues that are cultural and symbolic. Throughout all capitalistic society, work is extremely valorized, including that statement how work dignifies man. How it is better to be working than roaming in the streets”, states Isa de Oliveira, from the National Forum on the Prevention and Eradication of Child Labor. “When considering children, adolescents, and young people, the priority is the present for the purpose of guaranteeing, through opportunities, a future for the school and guaranteeing decent and respectable work. And child labor denies all that”.

How the fight against child labor in Brazil

Through fiscal audits, the Labor Ministry inspects companies — especially — and also informal activities, such as street venders. When they find a child working in that situation (generally adolescents), they define the withdrawal of those young people and send them to the Government Labor Ministry (MPT) ,where they call the company and try to adjust that conduct or if not, then they file a public-civil lawsuit, because adolescent labor exploitation has been proven.